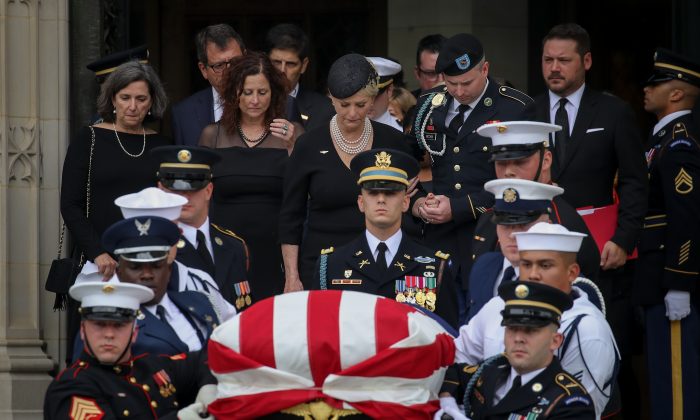 An honor guard carries the casket of Sen. John McCain at the Washington National Cathedral in Washington on Sept. 1, 2018. (Drew Angerer/Getty Images)
Viewpoints

It’s right and proper to mourn John McCain. He was a hero: when his nation called, he put his life on the line. We must and will always respect that, and we should. That his death should be politicized and used to this degree, so that even his daughter’s parting eulogy should have to be debased into one more never-ending round of Trump-bashing, is embarrassing and disgusting.

There was a time in American history when you could tell the difference between a funeral and a political rally. Not anymore. The memorial service of the late Senator John McCain quickly devolved into a Trump bashing, with the establishment using eulogy after eulogy to attack President Trump. What should have been a time of reflection on the complex legacy of an American hero instead has been a cheap descent into political trash talk.

Conservative commentator Candace Owens summed it up best, “This new trend of using funerals and eulogies to deliver political messages is really quite disgusting. Sympathy from death as means to sway public opinion is next level corrupt. Everyone involved should be ashamed of themselves.” Instead of mourning the dead, we race to the bottom.

There was no love lost between the president and John McCain, and Trump did not pretend there was. By contrast Donald Trump struck just the right note—dry, almost elegant. He expressed his sympathies to McCain’s family, ordered flags to fly at half-mast beyond their federally mandated limit, and took the special step of authorizing and sending Air Force Two, which only he can do, to carry John McCain’s casket to the funeral.  And in doing so, he showed due respect, while remaining true to himself. Then he got on with his job, as any American president both should and is obliged to.

In contrast, the fake media’s two-faced appreciation not only cheapens the funeral of John McCain the man; it cheapens our appreciation of McCain’s place in history. And although countless examples may be introduced, a few glaring include Politico, The Huffington Post, and The New York Times.

Just 10 years ago, in 2008, posting to Politico, civil rights icon U.S. Rep. John Lewis (D-Ga.) compared John McCain to George Wallace and said that McCain and his running mate Sarah Palin were “sowing the seeds of hatred and division,” fostering “an atmosphere of hate” that led to scenes like the famous burning of a church burning in Atlanta.

Now Lewis tweets that McCain was “a warrior for peace,” adding “he will be deeply missed.”

In 2008 the Huffington Post ran articles asking, “Is John McCain Mentally Fit To Be President?” Today it calls him a “bipartisan American hero.”

Also in 2008, the New York Times said McCain’s campaign ran on “class warfare”, “race-baiting” and “xenophobia.” Now they highlight his funeral eulogies, and crow about how McCain “Got The Last Word Against Trump” in a farewell statement.

The glorification of John McCain in the media is not really about celebrating John McCain or his legacy. It’s about bringing together the anti-Trump community for yet one more assault on Trump. Clearly, Trump’s enemies want to whip up all the emotion they can.

Although we find it sad that others have used McCain’s passing to take yet another shot at the president. We can’t help but to find it equally distasteful that McCain took the opportunity to settle old scores himself.  Sarah Palin, McCain’s choice of running mate in 2008, was pointedly asked not to attend. Throughout her career Palin had not said one word critical of McCain and many good ones. Is this consistent with our American ideals?

One wants to believe that an ultimate patriotism still burns in the hearts of every American, whatever their political views; that in the end we all care more about lifting America up than about tearing political opponents down. One wants to. But with every case like this it becomes harder and harder.

Is this how we would want our American warriors to be remembered? Or, as Americans, do we want our warriors to be known for being graceful and dignified in death. Offering a place for all to mourn regardless of political leanings—as experienced at the funeral of our great President Ronald Reagan.

Jason D. Meister is an advisory board member of Donald J. Trump for President. Meister frequently appears on national television and radio broadcasts, including various interviews on Fox Business Network, Bloomberg, the BBC, Wall Street Journal Live, and Huff Post Live to discuss politics, markets, and finance. You can find him on Twitter @jason_meister