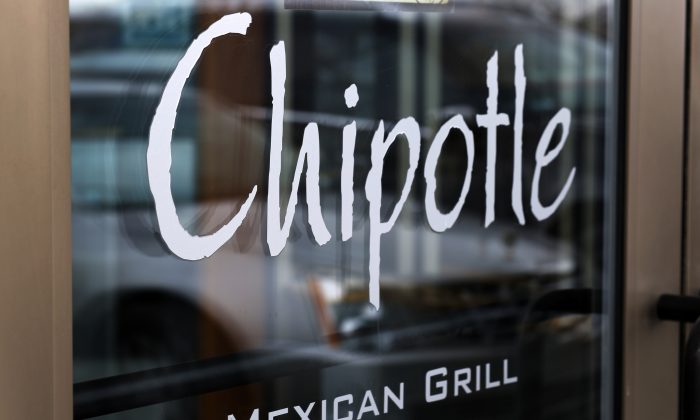 A Chipotle Mexican Grill in Robinson Township, Pa., on Jan. 28, 2014. Chipotle says it is tightening its food safety standards after its restaurants were linked to dozens of cases of E. coli. The Mexican food chain says it hired IEH Laboratories in Seattle to help improve its system after reports in late October 2015 that linked E. coli cases to its restaurants in Oregon and Washington. Since then, additional cases have been reported in California, Minnesota New York, and Ohio. (AP Photo/Gene J. Puskar)
New York

NEW YORK—Flying burritos will soon be a reality over Virginia Tech.

Chipotle is taking part in a test this month that will let some of the university’s students and staff have their favorite tortilla-wrapped meal delivered by drone.

Virginia Tech is conducting the test with Project Wing, a unit of Google owner Alphabet Inc., which makes self-flying devices that deliver food, medicine and other goods.

Chipotle’s burritos will be put together at a food truck and then loaded on a drone.

The flights will take place at an undisclosed site on Virginia Tech property, but not at the main campus in Blacksburg, said Mark Blanks, director of Virginia Tech’s Mid-Atlantic Aviation Partnership.

“It’s real customers that are working and need lunch and want it delivered by drone,” Blanks said.

Only a select group of people from Virginia Tech will be able to make orders. Hundreds of flights and burrito deliveries are expected to take place over several days, Project Wing said.

It will just be burritos, though. Other menu items won’t be delivered by drone, said Chris Arnold, a spokesman for Denver-based Chipotle Mexican Grill Inc.

Many companies see drones as the future of delivery. Several are currently testing them, including online seller Amazon.com Inc.

The Federal Aviation Administration approved the Virginia Tech site for drone testing in 2013.

Virginia Tech announced the food delivery test on its website Thursday, and Chipotle’s role was first reported by Bloomberg News.