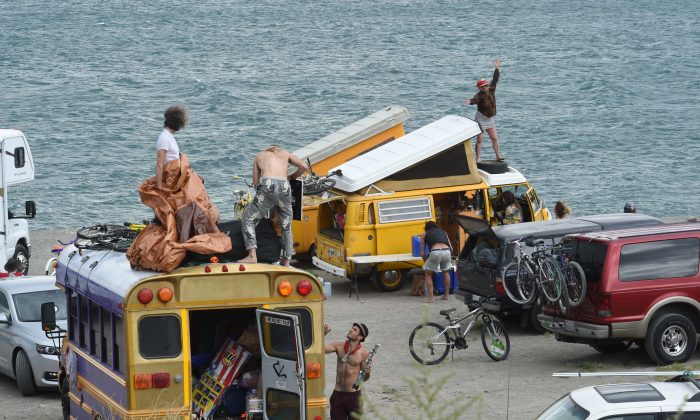 A woman dances on top of a van while other people set up camp on Blockhouse Beach at Pyramid Lake on Monday, Aug. 25, 2014, northeast of Reno, Nev. Thousands of Burning Man enthusiasts were on the outside looking in Monday after a rare batch of heavy rain forced organizers to temporarily close entry to the counterculture event in the desert 90 miles north of Reno. Many took advantage of the opportunity to camp at Pyramid Lake and made the best of the lake's beaches. (AP Photo/Reno Gazette-Journal, Tim Dunn)
US

Burning Man, which started a day late due to rains, ended its week-long festival in the Nevada desert.

The last sculpture went up in flames on Sunday night, and numerous festival-goers left the Black Rock site on Monday.

The iconic Man was burned on Saturday, while the Temple of Grace was the last one to go up in smoke on Sunday.

The Pershing County sheriff’s office identified the victim on Thursday as Alicia Louise Cipicchio of Jackson. No other injuries were reported.

The accident happened just after midnight near Center Camp in the temporary village named Black Rock City, event spokesman Jim Graham said. Cipicchio was pronounced dead on the scene about 120 miles north of Reno, he said.

Cipicchio was a 2008 graduate of the University of North Carolina, Greensboro, where she studied art. She worked at RARE Gallery of Fine Art in Teton County near Yellowstone National Park, the Reno Gazette-Journal reported.

“Our thoughts and prayers are with her family, friends and campmates. Black Rock Rangers and Emergency Services Department staff are providing support to those affected,” she said in a statement.

The last accidental death there was seven years ago, when an attendee fell under a trailer, Graham said.

Humboldt General Hospital CEO Jim Parrish told the Gazette-Journal earlier this week that two Burning Man participants have died at the hospital in Lovelock since it began providing medical response in 2011, but it wasn’t clear if they were in transit or actually at the event.

At least three other people have died in accidents at Burning Man since it moved from San Francisco’s Baker Beach to the Black Rock Desert in 1990.

Michael Furey, a neon artist from San Francisco and friend of Burning Man co-founder Larry Harvey, was killed in a collision with a van while riding his motorcycle at night in 1996.

Katherine Lampman of Belmont, California, died after she reportedly jumped off a moving art car and fell into the path of another oncoming vehicle in 2003. That same year, Barry Jacobs died from injuries he suffered when the small plane he was piloting crashed at the Black Rock City airstrip.