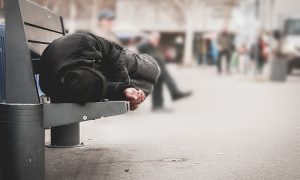 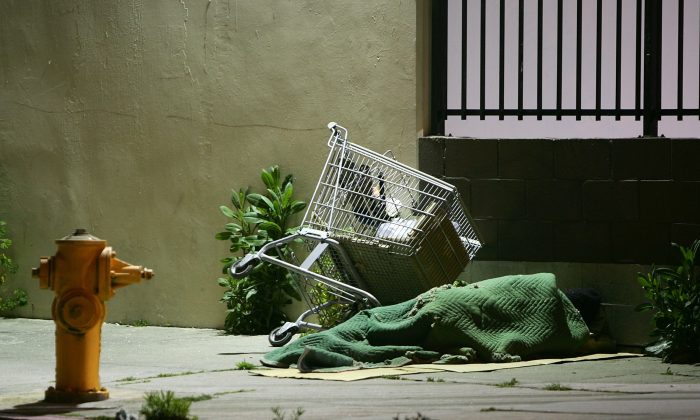 In this file image a homeless person sleeps by his shopping cart on a downtown sidewalk in the early morning hours of April 19, 2006 in Los Angeles, California. (David McNew/Getty Images)
Crime and Incidents

A burned body was found stuffed in a shopping cart at a homeless encampment in the suburbs of Los Angeles, according to authorities.

The body was discovered on Sept. 11, near a park in Van Nuys in the San Fernando Valley, according to the Associated Press.

The discovery follows several recent fire-related attacks in recent weeks on the city’s homeless population, including a 62-year-old burned to death in the city’s notorious skid row.

The growing homeless crisis in Los Angeles—along with many large U.S. cities—was also highlighted in recent months by the Trump administration, with hatchling federal plans brought to light  by the Washington Post in recent days.

The body of the latest victim, which was severely burned, has not been identified, according to Alan Hamilton, the second-in-command at the LAPD’s Valley Bureau.

The body was “recovered in an area where transients are known to encamp,” Hamilton told the Los Angeles Times, but said was not immediately clear whether the victim was homeless.

No arrests have been made and it was not immediately clear what led to the attack, and despite being investigated by the Robbery-Homicide Division, has yet to be officially labeled as a homicide.

The was body moved to the Van Nuys area after being burned in another location, according to the LA Times, citing an unnamed law enforcement source, who also said that investigators believe the fire was started with an accelerant.

Two weeks ago, a man was charged with murder over the death of homeless guitarist Dwayne Fields, 62, who was killed inside his tent on Aug. 26 when it was set alight.

According to the DA, Jonathan Early, 39, is charged with one count of murder, “with the special circumstance allegation that the crime was intentional and involved the infliction of torture.”

He is accused of setting fire to the tent in skid row—where one in three people are estimated to be homeless—before fleeing. He was arrested shortly after.

The same day that the man burned to death in his tent, LAPD released a video showing a homeless man being beaten with a pipe and left for dead.

President Donald Trump expressed frustration in July while discussing the homelessness problem in Los Angeles and San Francisco during a recent interview, calling the situation “disgraceful.”

17,396 people were living in makeshift shelters and vehicles, according to the report, including 3,276 in tents.