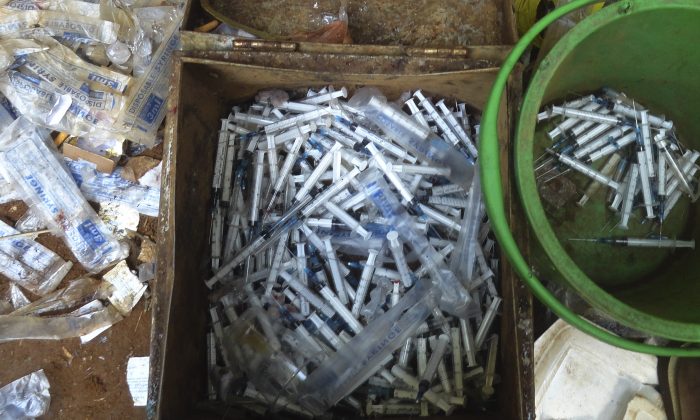 Syringes used to inject drugs are seen in a metal box and a plastic bucket in a tent near the jade mines surrounding Hpakant, in Kachin State, some 600 miles north of Yangon, Burma, in October 2014. (AP Photo)
Asia & Pacific

HPAKANT, Burma/Myanmar—Residents of this town in northern Burma’s opium country became their own drug investigators out of frustration with authorities’ failure to keep heroin and methamphetamine addiction from consuming their villages. Now they say they have an explanation for officials’ poor performance, thanks to a woman charged with drug-dealing who kept careful track of her expenses.

When the community-based Kachin Anti-Drug Committee made a citizen’s arrest of the suspect, it found two notebooks listing a combined $500,000 in payoffs to authorities in Kachin state including an army commander, top police officials, anti-drug officers, township officials and others.

The committee showed The Associated Press photos of the ledger but did not provide line-item details on payoffs and recipients, saying it is trying to get authorities to improve drug enforcement and is using the notebooks as leverage. The group Global Witness, which campaigns against corruption and for transparency and protection of people’s rights in use of mining, logging and other resources, viewed the document and agreed with the committee’s description of the contents.

“For us, this book is useful for negotiating to try to get the government officials and police involved in our project,” Naw Lawn, secretary of the committee, told the AP. “Our society is being destroyed by drugs. We have many young people who are addicts, and this is destroying our future.”

Officials with the state anti-drug police force failed to respond to repeated requests for comment.

Naw Lawn and other community leaders set up their group last year to fight the surge in drug use in Kachin, an ethnically diverse, mostly Christian region where the Kachin Baptist Convention is the most influential local institution. With Burma’s government attempting to end a decades-long insurgency by members of the ethnic Kachin minority, authorities have accepted the committee’s assistance.

Isolated by a lack of paved roads or other modern transport and by fighting between rebel insurgents and government forces, Hpakant is a frontier region marked by huge jade-mining operations that have spoiled the environment and left most local residents destitute, with scant options for jobs or other means of survival.

Young people shoot up from dawn to dark near the jade mines surrounding Hpakant, some 720 kilometers (600 miles) north of Yangon, Burma’s biggest city.

Addicts, their arms dotted with constellations of needle marks, squat under makeshift tarp shelters or sometimes just shoot up in open daylight. Overdoses are increasingly common, and crime is a growing problem among addicts desperate for drug money.

Committee members say they were attacked by drug dealers in a raid early this year, and now conduct operations only in huge groups of 300 or more, with one or two police officers accompanying them. They say they have also been threatened and harassed by some police who view them as interfering.

Committee members say the woman arrested with the ledger in June is among Hpakant’s biggest drug dealers. Naw Lawn said the group also confiscated $3 million in cash and a “huge amount” of drugs during the arrest. The suspect is awaiting trial.

The financial ties to local officials allegedly revealed in the notebooks tell only part of the story of the Burma drug trade’s ties to the powerful.

Burma trails only Afghanistan in production of opium, the main ingredient in heroin. Its opium poppies are grown mostly in Kachin and Shan states, where the government has long fought rebel groups seeking more autonomy for their respective ethnic groups. Both the military and rebel groups have used the opium trade to further their causes.

The Kachin Women’s Association of Thailand said in a 2014 report that Burma’s military uses the drug trade as a weapon of war, authorizing border guards and local militias to grow opium and produce heroin and meth. AP reporters have seen opium farms protected by army-controlled militia groups.

The government has attempted to stop opium-growing with eradication programs intended to compel farmers to switch to legal crops, but those efforts have fallen well short of expectations.

In Kachin state, drug use is especially common among the young and among migrants who work on the margins of the big mines, hoping for lucky finds of jade. A single shot of heroin goes for 2,000 kyat (about $1.60), or the equivalent of the lowest price of a small piece of jade, Global Witness said in a report on jade released Friday. It said itinerant miners take up to five such shots a day.

Naw Lawn says that despite threats and intimidation, the Kachin community in Hpakan is determined to try to fight drug abuse.

“We really want the drug addiction and dealing to end soon,” he said. “We don’t want our society to be broken. That’s why we stood up and started doing this on our own.”