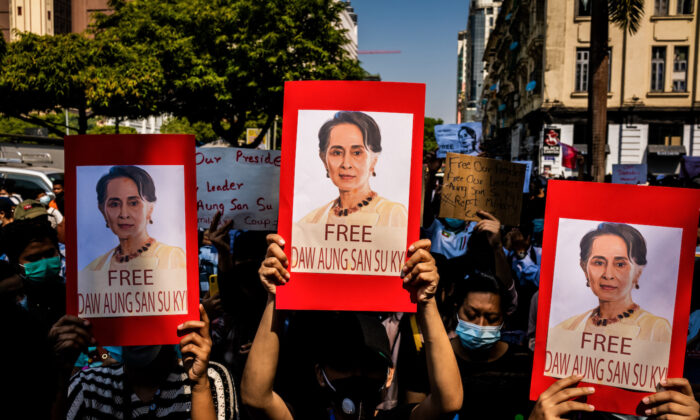 The corruption charge was filed against Suu Kyi for allegedly accepting four payments totaling $550,000 from a private firm in donations to Daw Khin Kyi, a charity foundation named after her mother, while she was still in power, according to the ministry’s statement.

The cases are among about a dozen brought against the 76-year-old Nobel laureate since the military seized power last February, ousting her elected government and arresting top members of her National League for Democracy Party. Each corruption charge carries a maximum of 15 years in prison.

Suu Kyi has already been sentenced to six years in jail for illegally importing and possessing walkie-talkies, breaching coronavirus restrictions, and incitement against the military.

Her lawyers, who had been a source of information on Suu Kyi’s proceedings, were served with gag orders in October last year and were unable to give comments.

The junta ministry’s statement came after its troops attacked Pale Township in northwest Sagaing Region on the eve of the one-year anniversary of the February military coup forcing about 10,000 villagers to flee without food or basic necessities.

Junta troops reportedly raided and torched about 400 homes in Mwe Tone and Pan villages in Pale Township on Jan. 31, over accusations that the two villages had served as a refuge for anti-junta forces, Radio Free Asia reported.

A resident of Mwe Tone village claimed that the troops burned down the entire village, leaving only one or two homes standing, before going west and torching homes in Pan village.

“I have been unable to return to the village,” the resident said. “I am staying at a monastery. They destroyed our homes even though we didn’t attack them.”

On that same day, the United States imposed sanctions on seven individuals and two entities linked to the Burmese military junta in coordination with Britain and Canada to “demonstrate the international community’s strong support for the people of Burma.”

Among those sanctioned are Union Attorney General Thida Oo, Supreme Court Chief Justice Tun Tun Oo, and Anti-Corruption Commission Chairman Tin Oo, for their roles in the junta’s “politically motivated” prosecution of Suu Kyi and other democracy leaders, the U.S. Treasury said in a statement.

“We will continue to target those responsible for the coup and ongoing violence, enablers of the regime’s brutal repression, and their financial supporters,” Under Secretary of the Treasury for Terrorism and Financial Intelligence Brian E. Nelson remarked.

At least 1,500 people have been killed since the military seized power in Burma, also known as Myanmar. Some 11,787 others were arbitrarily detained for opposing the military through peaceful protests and online activities, 8,792 of which remain in custody, and at least 290 have died as a result of torture, according to the U.N.