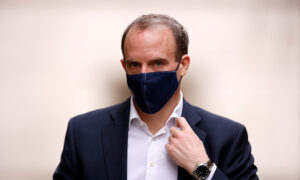 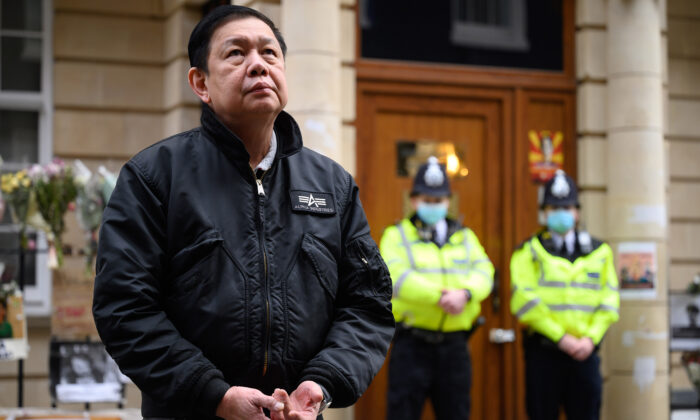 Former Burmese Ambassador to the UK Kyaw Zwar Minn listens to a statement being read on his behalf as he stands outside the Burmese Embassy in London on April 8, 2021. (Leon Neal/Getty Images)
Asia & Pacific

Burmese Ambassador in UK Locked Out of Embassy

Burmese ambassador to the UK Kyaw Zwar Minn was locked out of the Burmese Embassy on Wednesday.

Burma, also known as Myanmar, has been controlled by the military since a coup on Feb. 1, when civilian leader Aung San Suu Kyi was detained in an early morning raid.

The ambassador has broken ranks with the ruling junta in recent weeks, calling for the release of Aung San Suu Kyi.

He reportedly spent Wednesday night in his car outside the embassy after being denied entry.

A spokesperson for Kyaw Zwar Minn said on Thursday morning that the ambassador had been recalled.

“Due to his announcement in March, the ambassador has been recalled by the Myanmar military regime,” the spokesperson said outside the embassy.

“Since then, he stopped following instructions from the Myanmar foreign ministry, and he has been meeting with many diplomatic counterparts and the Myanmar community to discuss the current situation in Myanmar, hoping to find a peaceful solution,” he said.

“Due to his stance, the Myanmar Embassy in London has been seized by the military attaché yesterday evening. The ambassador has been locked out since then. There was a coup in Myanmar in February, now a similar situation in central London,” he added.

“We condemn the bullying actions of the Myanmar military regime in London yesterday, and I pay tribute to Kyaw Zwar Minn for his courage,” Raab wrote on Twitter.

“The UK continues to call for an end to the coup and the appalling violence, and a swift restoration of democracy,” he added.

According to Burma’s state-run MRTV, the military had recalled Kyaw Zwar Minn because “he did not conduct himself in accordance with given responsibilities.”

The BBC said that although Raab condemned the bullying actions, “the UK has accepted the change.”

AFP also cited an anonymous source saying that the Burmese military has given official notice to terminate Kyaw Zwar Minn’s tenure, and that the UK government would “have no choice but to accept it.”

The Epoch Times hasn’t been able to independently verify this information.

In an email to The Epoch Times, a spokesperson for the British Foreign Office said: “We condemn the way the Myanmar military in London barred their Ambassador from entering the Embassy yesterday evening.

“We pay tribute to the courage of Kyaw Zwar Minn in standing up for the people of Myanmar. Given the bullying behaviour towards Mr. Minn, we are seeking to ensure he can live safely in the United Kingdom, while he decides his long-term future.

“We continue to call for an end to the coup in Myanmar and a swift restoration of democracy.”

This article has been updated with the response from the UK’s Foreign, Commonwealth & Development Office.