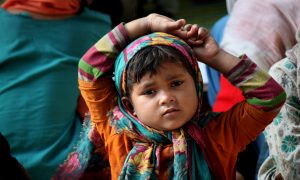 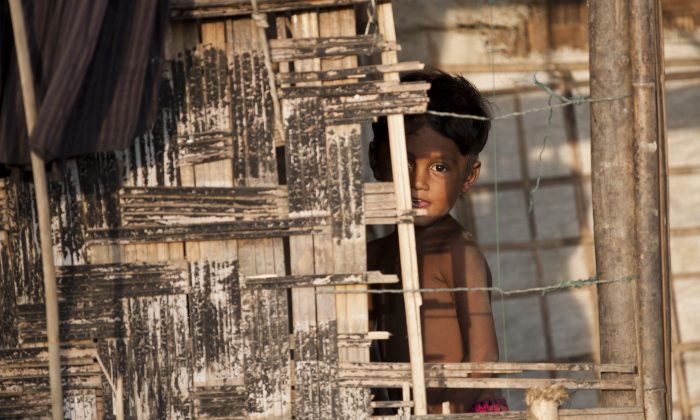 An ethnic Rohingya Muslim child in a camp set up outside the city of Sittwe, in Rakhine State, Burma, on May 21, 2015. Malaysia ordered search and rescue missions on May 22 for thousands of boat people stranded at sea, as Myanmar hosted talks with US and Southeast Asian envoys on the migrant exodus from its shores. (Ye Aung Thu/AFP/Getty Images)
Opinion

The very word “Burma” was once shorthand for a brutal military dictatorship, but things have now changed dramatically. Burma (or Myanmar) has come to be viewed as a country firmly committed to the establishment of a new reality, founded upon respect for human rights and the rule of law.

Behind this changing perception are a series of planned government reforms and gestures. In 2010, under the auspices of the so-called “seven stage road map to democracy,” Burma’s government ended the 15-yearslong house arrest of Aung San Suu Kyi. A further 2,000 political prisoners were subsequently released, many of whom had languished in the aptly named Insein Prison.

Given a series of recent events and one longstanding problem, Burma’s reform process is in serious danger of collapse.

With the country’s leading opposition politician free, a notionally civilian government was formed. General and local elections were held, and support for the opposition was publicly demonstrated. Today, Burma’s civil society is re-emerging as legal reforms allow for at least some political expression. Presidential elections are planned for November 2015; providing she is able to stand, the prospect of a President Aung San Suu Kyi offers the prospect of a new dawn for Burma.

Given these achievements, it seems reasonable to say that Burma’s transition is going well—the country is making meaningful progress along the road to democracy. But sadly, that conclusion is not yet justified. Given a series of recent events and one longstanding problem in particular, Burma’s reform process is in serious danger of collapse.

While there have been moves toward full-blown democracy, Burma’s military continues to wield considerable political power. The transition has yet to lift much of the population out of dire poverty, despite an explosion of foreign investment.

Meanwhile, the constitution effectively bars Aung San Suu Kyi from competing in the presidential elections; anyone with strong ties to a foreign country is banned from the presidency—and her children are foreign nationals. The government has been promising a national referendum as a means to remove the offending article 59(f) of the constitution, but it is dragging its feet on the issue and time is fast running out.

However, all of these concerns pale into relative insignificance when set alongside the greatest threat to the reform process: religious hatred and ethnic conflict.

Regardless of who holds power after November 2015, the explosion of violence against ethnic and religious groups is a direct consequence of the reform process, which has now been put in jeopardy by a wave of racist violence. The most visible incarnation of this development is the ongoing campaign against the Rohingya Muslim minority.

Burma’s Rohingya people largely inhabit a corner of Rakhine state, but many of whom are now risking their lives by seeking refuge elsewhere. While the Rohingya have endured persecution in Burma for decades, the conditions they face have worsened of late. The Rohingya are hated by many in Burma. The government denies them citizenship, a policy that enjoys widespread support across the country—even among some who were themselves victims of human rights violations not so long ago.

Most deadly of all, they now have to contend with a militant ultra-nationalist Buddhist movement, led by Wirathu, a monk who was himself a former political prisoner, freed in 2010. He has been implored to tone down his rhetoric by the Dalai Lama himself.

The explosion of violence against ethnic and religious groups is a direct consequence of the reform process.

The Rohingya do not have a monopoly on attracting such intense hatred; other Muslim communities and even many Christians in Burma are being targeted too. The government’s response is to selectively defend such attacks on the grounds that the perpetrators are only trying to protect their own communities’ right to exist.

As further evidence that the government sees attack as the best form of defense, it has recently enacted a series of laws intended to “protect” race and religion in Burma.

These laws include overtly discriminatory prohibitions on interfaith marriage, divorce, changing one’s religion, and even require some women to space pregnancies apart by at least three years, decried as an attempt to curb the growth of minority populations. The Rohingya have been described by the U.N. as among the most persecuted minorities in the world—and Burma has recently been labelled as the world’s eighth most dangerous state for religious and ethnic minorities to live in.

Burma in Transition: The Plight of the Stateless Rohingya

Burma Could Learn From India: Channeling Diversity Into Democracy Instead of Strife

State-sponsored chauvinism and sectarianism are not part of the West’s vision of a rights-respecting Burma. They are, however, beginning to take hold in some peoples’ perception of the reform process. So they should. If Burma is ever to fully respect human rights it will have to confront its nightmarish identity politics. That will be no easy task given how deep and raw the wounds of religion and ethnicity still are for many in the country.

Andrew Fagan is the director of undergraduate studies at the Human Rights Centre of the University of Essex in the U.K. This article was originally published on The Conversation.