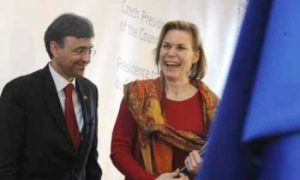 By James Burke
Print
BANGKOK—After decades of conflict, Burma (offically called Myanmar) suffers one of the worst landmine problems in the world with more than 10 percent of the country’s townships being contaminated with landmines, says a Swiss-based humanitarian group.

The townships are mainly located in areas dominated by ethnic minorities, on the other side of the border from Thailand, says a report launched in Bangkok this week by Geneva Call.

“The geographic scope of the problem is that 34 of the country’s 324 townships are affected,” said Katherine Krammer, the Asian program directory with Geneva Call.

The report estimates that approximately 5 million people live in the affected townships, and that thousands of civilians have been injured or killed by landmines.

However due to difficulties in accessing the affected regions Geneva Call says there is little known about the true extent of the problem and the impact of the mines on affected populations.

Krammer said that there are significant challenges in addressing the landmine crisis in Burma. The key hurdle, she said, is that the ruling military junta refuses to acknowledge there is an issue.

“Since 2004 the government has refused to authorize activities specifically directed toward addressing the landmine problem,” she said.

Based on research performed between June and September of last year, the report says that the junta has banned almost all forms of landmine action with the exception of a limited amount of prosthetic assistance to people with amputated limbs.

The size of the landmine problem has been exacerbated by decades of conflict in the eastern regions, said Krammer. Since Burma gained independence from Britain in 1948, various ethnic groups have sought greater autonomy, resulting in cases of armed rebellions.

Currently, a number of armed groups, such as the Karen National Liberation Army and the Shan Army-South, continue to oppose the military junta that has ruled the ethnically diverse country with a strong hand since 1962.

“Right now the situation is such that it is not a very stable environment for any demining so it is unlikely that demining can take place in the near future,” said Krammer.

However, locally based organizations are quite keen to work on the issue, she said while adding that several were already conducting some type of landmine action such as survey work and victim assistance.

According to research conducted by Canadian organization Landmine and Cluster Munition Monitor, Burma’s junta is the only country where the government is laying antipersonnel mines.

The Geneva Call report, however, acknowledges that it is not just military or the ethnic armies deploying landmines. Villagers have used them to protect their communities against attack or theft, and they are also used as so-called “business-mines” by drug production and trafficking interests.

“The mines that have been used have been both commercially manufactured, both from the government’s plants as well as from other countries like China,” said Krammer while adding that homemade landmines are also in use. The report also said that Russia is supplying landmines to the Burmese military.

The report ranks Burma as having the third highest number of landmine accidents in the world. Afghanistan has the highest, followed by Columbia.