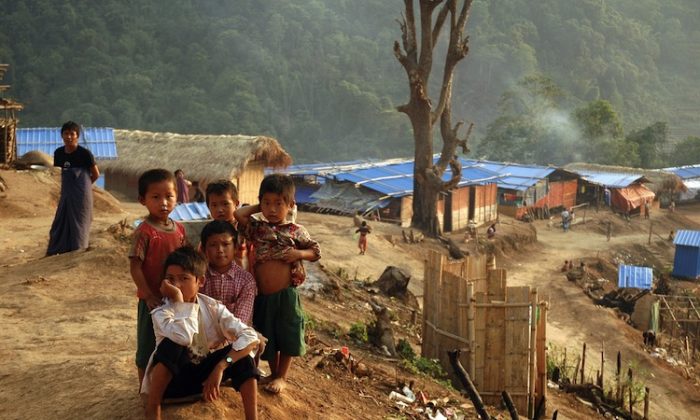 WASHINGTON—A humanitarian crisis is surfacing in northern Burma for the Kachin ethnic minority. Thousands are fleeing fresh fighting between the Burmese military and the Kachin Independence Army.

Brianna Oliver, spokeswoman for the U.S. Campaign for Burma, says fierce fighting, shelling, and human rights abuses have driven whole Kachin communities from their homes. Around 100,000 refugees are now desperate for food and shelter.

“The Kachin Independence Army (KIA) and the Burmese Army have been planting land mines and have been fighting around communities,” she said in a phone interview. “A lot of civilians have been hurt.”

According to Human Rights Watch (HRW) there are more than 85 camps of internally displaced people in Kachin State. Limited international resources have been allowed in, but in some areas humanitarian aid and food shortages are critical, reports HRW.

Unable to rein in a corrupt military, which remains constitutionally independent of the executive, Sein has refused international humanitarian aid to troubled ethnic areas including the Kachin and the Rohingya of the Rakhine State to the West.

Some U.S. congressmen say the humanitarian crisis in Kachin has been overlooked by the international community; they accuse the Burmese army of possible war crimes. A bipartisan group, including representatives Trent Franks (R-Ariz.), and Frank Wolf (R-Va.) and Sens. Mark Rubio (R-Fla.) and Ron Wyden (D-Ore.), sent a letter last week to President Barack Obama on the eve of his historic Burma trip. They urged him to call for a withdrawal of troops and more progress on peace talks.

“The plight of the Kachin is often overlooked by the international community and humanitarian conditions are seriously deteriorating in Kachin State and Kachin refugee camps,” the letter said.

President Obama highlighted the Kachin’s plight in a speech at Burma’s Yangon University on Nov. 19.

“You now have a moment of remarkable opportunity to transform cease-fires into lasting settlements, and to pursue peace where conflicts still linger, including in Kachin State,” Obama said.

Even as he spoke, however, fighting continued in Kachin. Government troops fired every half hour, according to Burmese media.

The Burmese military broke a 17-year cease-fire last year and, while peace talks continue (the last in October), no agreement has been reached.

Largely Christian, the Kachin are one of eight major ethnic minorities struggling for autonomy in Burma (also known as Myanmar).

Oliver says the stakes are high for all parties. She explained that the Kachin people, in line with other minorities, are arguing for autonomy on the grounds of an agreement made in 1947 under then leader, Aung San, father of noble laureate and now opposition leader party Aung San Suu Kyi.

The Burmese military, however, has great interest in controlling Kachin State. Kachin is not only a geo-politically strategic region, sharing borders with both India and China; it is also rich in resources.

Oliver says with the lifting of U.S. sanctions against many Burmese companies, the opportunities have increased.

“That is a huge push for the Burmese army to continue their fighting,” she said.

The issue is further complicated by Kachin’s proximity to China. Chinese authorities recently turned back refugees fleeing the violence, while Chinese and Burmese military forces maintain close ties. Two high-level Burmese military delegations visited their counterparts in China, just as Thein Sein was welcoming Obama to Yangon, according to Burmese website, The Irrawaddy.

Michael Green, security analyst at the Washington-based Center for Strategic and International Studies (CSIS) says Chinese money is backing corrupt military officials in land grabs and resources deals in Kachin. Achieving a resolution involving the military will be a challenge for Thein Sein.

“Separating the forces is one thing,” said Green at a CSIS briefing, “Actually having an enduring political solution to this question will really test … how much influence Thein Sein has over these very powerful cronies.”