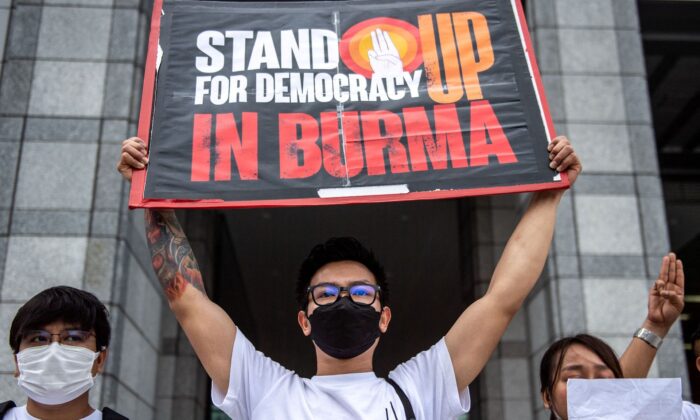 Activists including Burmese nationals take part in a rally to protest against Burma's junta execution of four prisoners, including a former lawmaker from Aung San Suu Kyi's party, outside the United Nations University in Tokyo on July 26, 2022. (Philip Fong/AFP via Getty Images)
International

Burma’s Junta Says Activists’ Executions Were ‘Justice for the People’

The ruling military of Burma, also known as Myanmar, defended its executions of four activists as lawful and carried out in the name of justice for the people.

State media reported that “the punishment has been conducted,” but did not say when, or by what means.

Junta spokesman Zaw Min Tun said the military authorities had “given [the activists] the right to defend themselves according to court order.”

“If we compare their sentences to other death penalty cases, they have committed crimes for which they should be sentenced to death several times,” he told a news conference in the capital Naypyidaw.

Zaw Min Tu said the executions were not personal, but legal, and the men were given a chance to defend themselves.

Human rights organizations were outraged, saying the death sentence was handed down without the right to appeal or legal counsel.

The country’s Foreign Ministry said it “rejects in the strongest terms” criticism from international powers such as the U.N., the EU, the United States, and former colonial ruler Britain.

“Such concerns and criticisms on the Burmese government’s legal actions could be tantamount to interfering in the internal affairs of the country and indirectly abetting terrorism,” the ministry said in a statement.

According to the Assistance Association for Political Prisoners (AAPP), the junta failed to inform the families of each of the convicts regarding the status of the military court, the location of the trials, and the nature of the trial.

“The execution announcement openly mocked the world’s efforts to abolish capital punishment. This calculated act uses political prisoners as hostage, to threaten a population resisting the military coup,” the AAPP said in a June statement.

The U.N. chief opposes the death penalty “in all circumstances,” the spokesman added.

Burma has been in chaos since a Feb. 1, 2021, coup, with the military junta led by top general Min Aung Hlaing ousting the elected civilian government of Aung San Suu Kyi.

More than 440,000 people have been displaced since the military seized power, while at least 1,600 have been killed and more than 12,500 arrested, according to a March U.N. report.

U.N. special envoy Noeleen Heyzer said in a statement last month that about 14.4 million people, or a quarter of the entire population of Burma, are in dire need of humanitarian aid.

U.S. State Department spokesperson Ned Price said on Monday that there could not be “business as usual” with Burma’s ruling military after its execution of democracy activists, adding that “all options are on the table” as it considered further action to punish the junta.

Price called on countries to ban sales of military equipment to Burma and refrain from any activities that would lend the junta any international credibility.