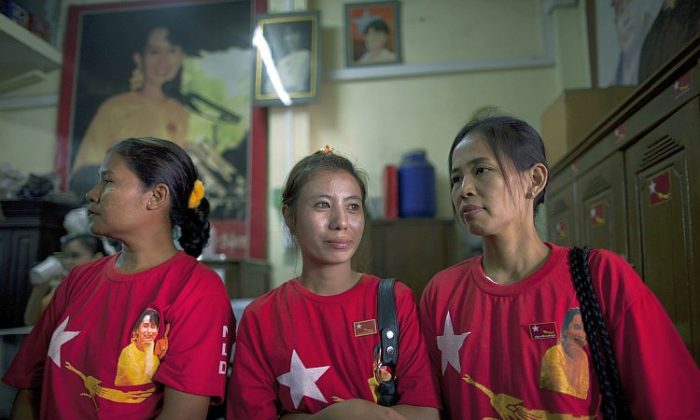 Supporters of Aung San Suu Kyi listen during a ceremony to honor Armed Forces Day at the National League of Democracy headquarters on March 27 in Yangon, Burma, ahead of Sunday’s parliamentary by-elections. (Paula Bronstein/Getty Images)
World

Depending on how things go with April 1’s by-elections in Burma, it may nudge Western governments closer or further away from lifting sanctions on the previously hard-line country now dabbling in democracy.

The fact that the world’s favorite democracy activist, Nobel Peace Laureate Aung San Suu Kyi, is vying for a seat after spending the better part of 20 years in detention is perhaps the greatest symbol of the rapid change occurring in Burma.

European Union foreign affairs ministers will meet later in April where it’s likely they’ll talk about easing or lifting sanctions if all goes well at the polls on April 1, especially if Suu Kyi is elected and given a post in government.

Yet for those long-invested in creating democracy in Burma, also called Myanmar, many argue that even if these elections were free and fair, their scale is too small to be taken as a benchmark, nor do they prove a real willingness to reform.

“What the regime is doing now is perform, rather than reform,” said Soe Aung, spokesperson of Forum for Democracy in Burma, one of the biggest political coalitions in exile.

According to Soe Aung, the West doesn’t have enough reasons to lift the sanctions, as none of the benchmarks have been met yet: there are still 900 political prisoners behind bars, repressive laws have not been repealed, and attacks against minority groups continue with nearly 70,000 refugees piling up at the border with China.

Soe Aung says the changes we have seen thus far are precisely because of the sanctions from the West.

“If there were not such pressure, we would not have seen this situation right now.” He suggests that the determinant for lifting the sanctions will be the full general elections in 2015.

If they are lifted too soon, say many, the incentive to reform will be lost.

“The reforms’ cardinal objective is to persuade the West to lift the sanctions. Once they are lifted, the rulers will take their time,” wrote Mysoong Kha, with the Thailand-based Shan Herald Agency for News, via e-mail.

The government’s main goal for seeing sanctions end, according to the pro-democracy camp, is to bring investment back to Burma.

“The generals are hoping that by allowing the National League for Democracy [Suu Kyi’s party] to participate in the elections, Western governments will be convinced to lift all sanctions, opening the floodgates to a massive rush of dollars, francs, and euros that will become a bonanza for one of the most corrupt regimes in the world,” wrote Stothard in an e-mail.

Suu Kyi’s National League for Democracy (NLD) and the government-backed Union Solidarity and Development Party (USDP) will contest 45 out of the 650 seats in Parliament, together with 15 other parties. The 45 seats are situated in nine regions or states and are split as follows: 37 for the seats of House of Representatives (Upper House), 6 for House of Nationalities (Lower House), and 2 for region or state Parliament.

Originally there were 48 seats at stake, but on March 23 the Union Election Commission canceled elections in three constituencies—Mogaung, Hpa-kant, and Bhamo—in northernmost Kachin State, declaring them unsafe regions, and postponed the polls until the situation improves. Since last June, there has been heavy fighting in the region with rights groups reporting serious abuses, including rape, torture, and executions.

Burma at the last minute invited a limited number of observers from the Association of Southeast Asian Nations (ASEAN), the United States, EU, Japan, South Korea, China, and the United Nations: two per country plus five from ASEAN. Three journalists from each country are also permitted.

“It is regrettable that the invitations come less than two weeks before Election Day. While it is too late for any observation mission that meets international standards, we urge the government of Myanmar [Burma] to allow full access for those observers,” said Somsri Hananuntasuk, executive director of the Bangkok-based Asian Network for Free Elections, in a statement.

On March 20, Burmese authorities asked Somsri and two other staff members to leave Burma because they had entered the country on tourist visas. They were there to try to meet with the Election Commission and to submit a letter requesting formal accreditation for an observation mission.

Despite President Thein Sein’s appeal for free and fair elections, accusations of intimidation and dirty tricks have been widespread.

In February, Suu Kyi had to postpone her campaign trip to Mandalay after the Election Commission denied an NLD request to use a local stadium for a rally; authorities in Bassein, Irrawaddy Division, held a last-minute university entrance exam in order to prevent local students from attending Suu Kyi’s campaign rally.

Incidents of threats have also been reported. According to ALTSEAN, the leader of the regime-backed Manpang People’s Militia Force in Lashio and Tangyan townships, in Northern Shan State, warned local villagers that they would be forcibly relocated if they did not cast their vote for the USDP candidate. Their report also states that a regime official in Myaungmya Township, Irrawaddy Division, summoned 130 local administrators to a meeting and warned them that if the USDP candidate did not win in that constituency they would have to resign.

In February, Burmese Human Rights Commission Chairman Win Mra announced the commission would not investigate allegations of human rights abuses committed in ethnic areas, such as in the Kachin area where the vote has been put off.

In September last year, a little-noticed amendment made by Parliament actually prevented those accused of connections with “outlawed” ethnic and exile groups from voting for the rest of their lives.

Burma’s democracy watchers do not expect much out of the elections.

“These are unfair elections for a small number of seats in a powerless Parliament. They are not as significant as Western governments are saying,” wrote Zoya Phan from Burma Campaign U.K. via e-mail.

Phan pointed that the benchmarks set up by the international community are only tackling the symptoms, not the causes. The main problem lies with the government’s constitution.

“Therefore, whether the by-elections are fair or unfair, it will not bring genuine change in the country.”

Kanbawza Win, former foreign affairs secretary to the prime minister of Burma in the 1970s, who now lives in exile in Canada, says the vote is mostly for PR.

“It is only that the Thein Sein government will get some legitimacy from the West having successfully used Daw Aung San Suu Kyi,” wrote Win in an e-mail.

Genuine reform would have to come in the form of a regime change, says Henry Soe-Win, of the Democracy for Burma (D4B) online group.

“I will only believe in the country’s genuine democratic change if Thein Sein stepped down from the president’s post, formed the interim government, and called for multiparty elections,” wrote Soe-Win in an e-mail from Perth, Australia.

Not everyone paints such a dark scene. Tim Aye-Hardy, director of the New York-based Burma Global Action Network, nonetheless sees the country heading in the right direction.

“Overall, I see hopeful and positive developments for the people and the country even thoough [sic] these developments may not be substantial enough for some folks from the pro-democracy movement side, and still there’re some potentials of circling back to total military rule,” wrote Aye-Hardy via e-mail.

“Thoughtful and cautious moves by all concerned and involved parties from both inside and outside of the country will help us continue move forward with the reforms. This is just a beginning step toward a long and challenging journey for Burma that we’d need to make sure everyone involved stays on the course and walk together until we reach our true democratic destination.”