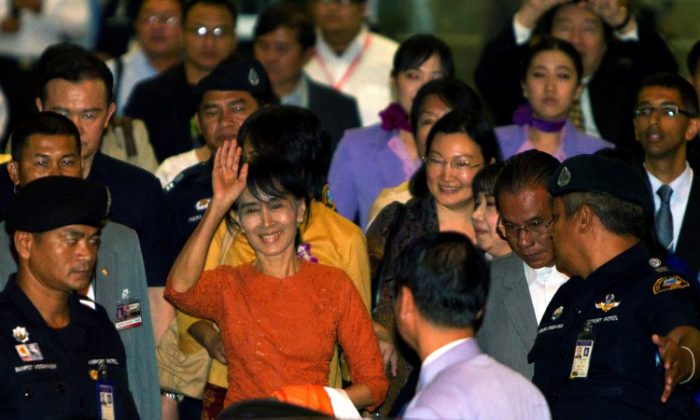 BANGKOK, THAILAND - MAY 29: Myanmar (Burmese) pro-democracy leader Aung San Suu Kyi leaves the Suvarnabhumi International airport on her first international trip in 24 years outside Burma May 29, 2012 in Bangkok, Thailand. Aung San Suu Skyi arrived in Thailand to attend the World Economic Forum on East Asia. Previously she was either under house arrest or too fearful that she wouldn't be able to return if she left Myanmar. (Paula Bronstein/Getty Images)
US

Nobel Peace Prize winner and General Secretary of the National League for Democracy in Burma, Aung San Suu Kyi is set to visit Ireland this June to receive Amnesty’s Ambassador of Conscience Award.

The award will be presented to Ms Aung San Suu Kyi at a concert held in her name at the Electric Burma tribute concert in Dublin on Monday 18th June at the Bord Gais Energy Theatre, Grand Canal Dock, Dublin 2.

The line-up of artists who will perform at the Electric Burma tribute concert will be announced this Wednesday by Bill Shipsey, founder of Art for Amnesty – Amnesty International’s global artist engagement programme.

According to Amnesty International Ms Aung San Suu Kyi visit to Ireland will follow immediately after she receives the Nobel Peace Prize in Oslo.

Ms Aung San Suu Kyi was detained under house arrest for almost 15 years and during her arrest has become one of the world’s most prominent political prisoners. She was awarded the Nobel Peace Prize in 1991, she only recently was granted a passport thus allowing her to travel abroad for the first time in 24 years.