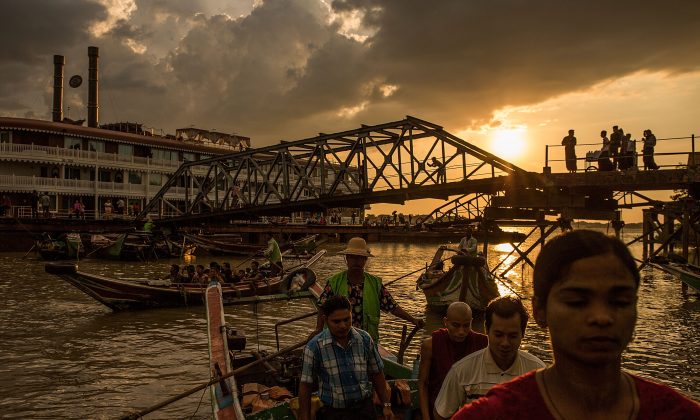 Sun shines in the distance as people ride boats and spend time at the pier on boats and swimming ahead of the landmark Nov. 8 elections, in Yangon, Burma, on Nov. 7, 2015. (Lam Yik Fei/Getty Images)
Asia & Pacific

A co-founder of Aung San Suu Kyi’s opposition party has told a crowd outside the party’s headquarters not to expect results from Burma’s historic general election tonight, but that the outcome appears to be “very good.”

Tin Oo thanked the thousands of people waiting outside the National League for Democracy’s headquarters, where giant screens were erected to show vote counting after polls closed Sunday.

He told them: “We won’t be able to announce the result yet. All I can say is that the NLD is in a very good position.”

He said that the 70-year-old Suu Kyi would not come out to speak to the crowd Sunday night and asked supporters to return Monday morning.

Initially, the NLD had said it expected to announce its provisional tally of ballots late Sunday or early Monday. But Tin Oo said announcements would wait until counting was completed.

The Election Commission has not said when final, official results are expected.

Crowds are gathering outside the headquarters of Aung San Suu Kyi’s opposition party in Yangon after polls closed in Burma’s historic election.

Thousands of people clogged the road late Sunday afternoon and cheered in support of the National League for Democracy, which is expected to win a big victory.

Big screens were erected outside the party headquarters broadcasting TV images of vote counting. Cheers erupted after every vote announced for the NLD.

The opposition party is expected to announce unofficial results late Sunday or early Monday, based on tallies from its massive team of election observers throughout the country.

One woman, 49-year-old Aye Mhu, was among the crowd in front of the NLD’s office. She described her state of mind as excited, ecstatic and happy as she watched the votes being tallied on giant screens.

She said: “I’ve never been this happy in my life. This is the happiest day of my life.”

Polls have closed on schedule in Burma’s historic general election.

Officials shut the doors of by-now empty polling booths at 4:30 p.m. Sunday. Most people had cast their votes in the morning, well before a heavy downpour beat down in Yangon an hour before voting ended.

The election is seen as the first real chance for democracy to take root in Burma. It is expected to be won by Aung San Suu Kyi’s opposition National League for Democracy party.

From behind barricades, Burma’s long-persecuted Rohingya Muslims expressed anger, sadness and hopelessness at being blocked from the country’s historic election.

Abdul Melik, a 29-year-old member of the ethnic minority, spent election day watching other people vote. He stared out from a camp on the outskirts of western Rakhine state’s capital, Sittwe, where the Rohingya are forced to live in squalid camps and can’t leave without official approval.

“I can see the Buddhist Rakhine, the Kaman Muslim and Hindus voting at a polling station close to the barricades,” he said in a telephone conversation. “We were hoping that somehow we’d be allowed to vote. But today I have lost hope of any change in my lifetime.”

“This is the day that hope ends,” he added. “We are angry and sad for losing the right to vote.”

There are concerns about the vote’s credibility, because for the first time about 500,000 eligible voters from the country’s 1.3-million-strong Rohingya Muslim minority have been barred from casting ballots. The government considers them foreigners even though they have lived in Burma for generations. Neither the opposition party led by Aung San Suu Kyi nor the military-backed ruling party is fielding a single Muslim candidate.

The European Union’s chief observer at the Burma elections says morning polling at the historic vote seemed “rather reliable” in Yangon, the largest city.

He said: “I can say at this time, on the morning of election day, that so far what we are observing is a procedure that looks as if it’s rather reliable.”

He added that, “it’s not free of flaws or shortcomings, but we did not expect that.”

Some issues seen ahead of the vote as potential problems “do not seem to pose a great problem at this point in time,” such as voters lists and problems with identification of voters.

However, he said he could only speak for the situation in Yangon, the largest city in Burma: “In the countryside, perhaps we will get a different kind of information.”

Analysts and observers have said the potential for fraud in remote, rural areas without observers was a matter of concern.

President Jimmy Carter’s grandson says there is a lot of excitement about Burma’s historic elections, with some people arriving at polling stations as early as 3 a.m.

Jason Carter, a trustee of the Carter Center, says: “It’s been a remarkable day already. We’re excited to see the energy of the Burmese people. It’s clearly been an important day for them.”

In stark contrast to decades past, Burma’s government has opened its doors to monitors from 28 nations, who together with local watchdogs number nearly 11,000. There are around 40,000 polling stations.

President Carter’s center has deployed 62 monitors in Burma. It is the group’s 101st election monitoring mission.

According to Jason Carter, enthusiasm was high among both voters and observers: “We talked to one (voter) who waited since 3 in the morning,” he said. And the group had gotten a report from one of its team who was getting ready to get on a boat to go to a remote area inaccessible by car.

Opposition leader Aung San Suu Kyi has cast her ballot in a polling booth near her lake-side residence to elect a legislator for the Bahan constituency in Yangon.

Accompanied by bodyguards and personal assistants, she walked into the crowded cramped corridor surrounded by hundreds of journalists before entering the voting room on Sunday. As she voted, journalists jostled to take her pictures. She then walked away without stopping to talk to journalists.

The general elections are seen as the first real chance for democracy to take root in Burma. They are expected to be won by Suu Kyi’s National League for Democracy party.

Suu Kyi voted Sunday in a polling station near her home in Yangon.

She is running for a seat she has held in the lower house of Parliament, which she’s expected to win easily. Her opposition party, the National League for Democracy, is also expected to win in a race against the ruling Union Solidarity Development Party, made up largely of former junta members.

Suu Kyi’s party won just over 80 percent of parliamentary seats in the 1990 general election, even though she and her top deputy were under house arrest. A shocked army refused to seat the winning lawmakers, with the excuse that a new constitution first had to be implemented—a task that ended up taking 18 years to accomplish.

Suu Kyi was again under house arrest for the next general election in 2010, which the NLD boycotted because it considered election laws unfair. Still, the vote ended the junta era—which had begun in 1962—and ultimately installed President Thein Sein, a former general who began instituting political and economic reforms to end Burma’s isolation from much of the world and jumpstart its moribund economy.

Hundreds of voters have lined up in a cramped school corridor where opposition leader Aung San Suu Kyi will cast her ballot later Sunday.

Holding their ID cars, the old, young, middle-aged and teenagers waited eagerly for their chance to vote in a snaking queue in the two-story school with green walls.

Many of the voters in the district, where Suu Kyi lives in a lake-side home, are from affluent families.

Some young voters say they are enjoying their first time voting, while the older ones say this is their best experience. Many had lined up long before the iron gates of the school were thrown open.

A first-timer, Ohnmar, who goes by one name, was so excited she couldn’t sleep the whole night.

The 38-year-old woman says: “I came to vote because I want change in my country. I think Aung San Suu Kyi will win if this is a real free and fair election.”

Polls have opened in Burma’s historic elections that are expected to be won by opposition leader Aung San Suu Kyi’s party.

Sunday’s elections are seen as a test whether the military’s grip on power will loosen, allowing the country to transition toward greater democracy. Burma was ruled by a junta for 50 years until 2011, and then for five years by a quasi-civilian government comprising former generals.

A total of 91 parties are contesting, but the main fight is between Suu Kyi’s National League for Democracy and the military-backed Union Solidarity Development Party.

Some 30 million voters are eligible to cast ballots over the next 10 ½ hours.