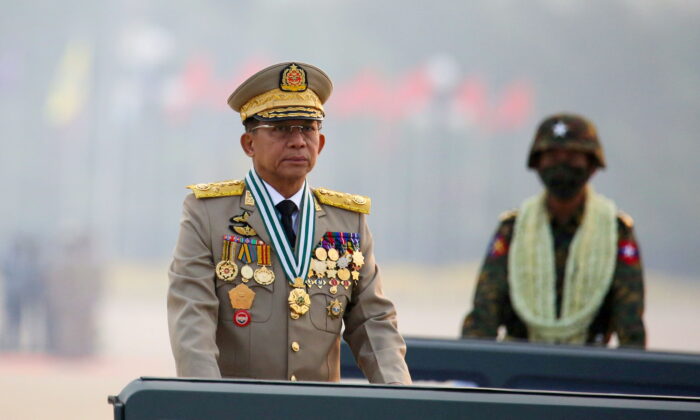 Burma’s military regime has sought to cooperate with Russia in the fields of nuclear energy and military technology, as both nations have been subjected to extensive Western sanctions.

Both sides “reiterated their plans to maximally efficiently use the existing potential to strengthen military and military-technical cooperation in the spirit of strategic partnership,” according to the Russian news agency Tass.

During his visit, Min Aung Hlaing struck deals with Russian state energy company Rosatom to cooperate on training and skills development in nuclear energy in Burma—also known as Myanmar.

Rosatom said in a statement that the memorandums of understanding with Burma “lays a solid foundation for the development of further cooperation on practical projects.”

Burma’s Information Ministry said that Min Aung Hlaing had met with Alexander Beglov, head of the St. Petersburg government, on July 14 to discuss further cooperation in the agriculture, economic, and education sectors.

The top general also toured Russian universities and military technological institutions during his visit, but it remains unclear whether he met with Russian President Vladimir Putin.

The United States and Europe imposed sanctions against Russia over its invasion of Ukraine, and against Burma’s junta for its coup that ousted the elected government of Aung San Suu Kyi early last year.

Notwithstanding the sanctions against Burma, Russia and China have continued to provide Burma’s junta with fighter jets. According to an Amnesty International report, the junta has used Russian MiG-29s and Yak-130s, and Chinese F-7s and K-8s to target civilians.

Pete Vowles, the head of the British Embassy in Burma, said on July 13 that he was “forced to leave” the nation but added that he was “glad” the British government did not “cave to pressure to legitimize their brutal coup.”

“I know the wonderful, strong and committed [U.K. team in Burma] will continue to stand up [and] do everything we can for the people of Myanmar who want nothing more than peace, freedom [and] justice,” Vowles said in a tweet.

His removal followed London’s downgrading of Vowles’ titles from ambassador to charge d’affaires ad interim of the British Embassy in Burma, which resulted in the junta placing restrictions on Vowles’ visa.

U.N. High Commissioner for Human Rights Michelle Bachelet said in March that the junta has shown “a flagrant disregard for human life” by launching airstrikes on populated areas and deliberately targeting civilians.