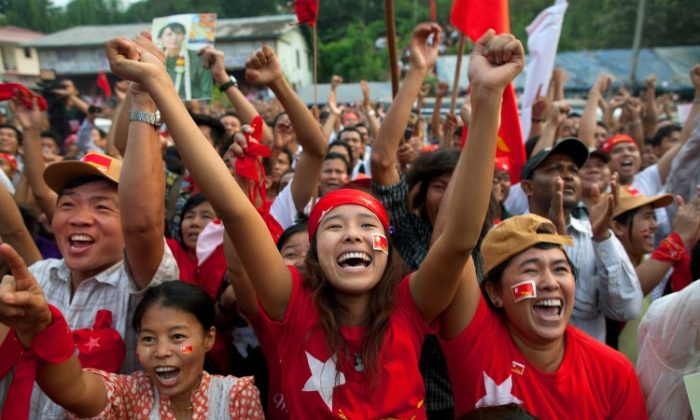 Burma Jubilant as Opposition Claims Victory at the Polls

Burma was a happy country on Sunday, with crowds of people singing and dancing in the streets, celebrating the expected victory of the opposition National League for Democracy (NLD) and exalted leader Aung San Suu Kyi, in historic, albeit small-scale elections in Burma.

According to preliminary figures, Nobel laureate Suu Kyi won 65 percent of the vote in her and overall, the NLD is poised to take at least 30 out of the 45 open seats in the 664-seat Parliament.

“It is a great achievement for the opposition,” said Tim Aye-Hardy, director of the New York-based Burma Global Action Network, who was monitoring the process closely.

Both the government and its proxy political party Union Solidarity and Development Party (USDP) had not made any statement by late Sunday evening. Official results are expected later in the week.

The by-elections, just the second free elections in the last 20 years of the country’s history, were being watched closely by the West as a benchmark along the way to possibly easing sanctions.

Although the opposition victory is just symbolic at this point in terms of reshuffling political power in Burma (also known as Myanmar), it is still a big opportunity, says Hardy.

“This is the opening of a democratic door to the next general elections in 2015 and a wake-up call for the opposition to get prepared. It is an opportunity for a bigger step in 2015 and getting much closer to genuine democracy.”

“We need to recognize and take this opportunity to do the best we can without compromising our principles,” says Hardy.

Although there were reports of irregularities on elections day, the vote passed generally peacefully.

“I suspect things are going rather well up to this point,” Pitsuwan told reporters on Sunday, ahead of an ASEAN summit.

“I have been in touch with the teams very, very closely and they report full enthusiasm, full alert, full awareness of all parties involved in the by-elections,” said Pitsuwan.

Still, the elections were not perfectly executed, according to critics.

The 150 international observers from ASEAN, the United States, the EU, Japan, China, and South Korea, as well as the United Nations, were invited to arrive in Burma only three days before the vote.

The National Democratic Institute and the International Republican Institute, whose representatives were sent to monitor the process on behalf of the U.S. government, said they did not “conduct a traditional election observation of the by-elections.”

Human Rights Watch also warned that the international community should not get too happy too soon about Burma changing.

“The April 1 by-election is not a panacea to Burma’s continuing human rights challenges and the international community shouldn’t be lulled into equating elections with reform,” said Elaine Pearson, deputy Asia director of Human Rights Watch in a statement.

“Prematurely scrapping sanctions and blindly pursuing engagement for humanitarian assistance and foreign investment in the absence of a functioning legal framework could derail the fragile gains of the past year.”

After the by-elections, the government has several challenges ahead. In addition to figuring out how to cooperate and incorporate the opposition caucus in government, which will have extremely high expectations, the government will also have to face the 900 political prisoners still held in jail and eventually compromise on amending the 2008 constitution, which sanctions military supremacy and impunity for human rights abuses.