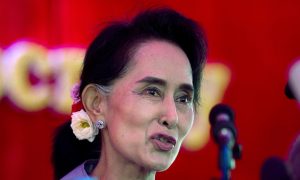 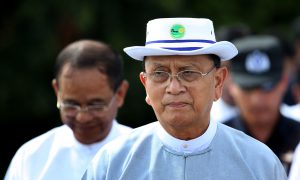 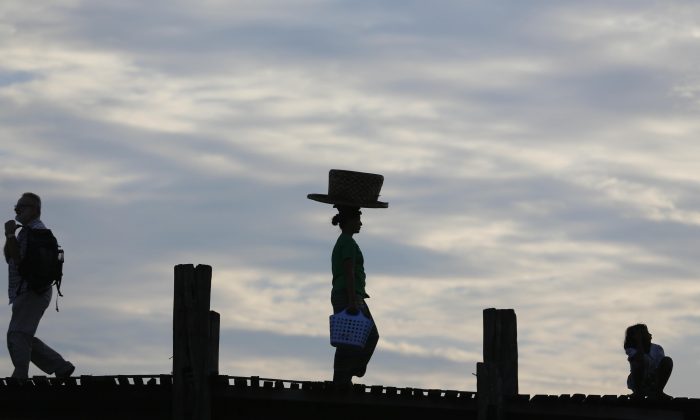 A street vender (C) walks on the historic U Bein Bridge near Amarapura, in Mandalay, Burma, on Nov. 10, 2015. Burma was trapped in a post-election limbo Tuesday with official results barely trickling in, although opposition leader Aung San Suu Kyi's party claimed a victory massive enough to give it the presidency and loosen the military's grip on the country. (AP Photo/Hkun Lat)
Asia & Pacific

Burma Army to Keep Privileges Even With Opposition Win

YANGON, Burma/Myanmar—Burma’s military-backed ruling party appeared set Tuesday for an overwhelming electoral defeat, but a victory by Aung San Suu Kyi’s opposition National League for Democracy party would not mean the end of military involvement in the nation’s politics. Far from it.

The military, which took power in a 1962 coup and brutally suppressed several pro-democracy uprisings during its rule, gave way to a nominally civilian elected government in 2011—with strings attached.

Aside from installing retired senior officers in its proxy political party to fill Cabinet posts, the army granted itself constitutional powers that enshrine its influence over the government no matter who is elected. In a state of emergency, a special military-led body can even assume state powers. Another provision bars Suu Kyi from the presidency because her sons hold foreign citizenship.

Right now, though, the focus is on the stunning, if not yet official, victory of Suu Kyi’s party over the ruling Union Solidarity and Development Party in Sunday’s elections.

In an interview Tuesday with the BBC, Suu Kyi said her party expects to win 75 percent of the contested seats in the 664-member two-chamber Parliament.

It staked its claim even though the government’s Union Election Commission had announced results for only 88 lower house seats by Tuesday afternoon, with 78 going to the NLD and five to the ruling party. The commission has given no explanation for the slow results.

“The NLD’s big victory is best seen as the first step of a negotiation that is going to play out in the coming weeks and months between the elected power of the NLD, and entrenched, constitutionally guaranteed military power,” said Phil Robertson, deputy director of the Asia division of New York-based Human Rights Watch.

When the former military junta oversaw the drafting of the 2008 constitution, he said, “they built a political structure that keeps Aung San Suu Kyi out of the presidency and locks in their influence and prerogatives—with things like 25 percent of the seats reserved for the military, the 75 percent approval bar to amend the constitution, no legislative scrutiny of military budgets, and ensuring only military men can lead the most powerful ministries, like defense, home affairs and border affairs.”

“So, even with the people behind her, Aung San Suu Kyi will face problems—because if she tries to force her way with the military, it will be like banging her head against the wall,” Robertson said.

Because the military still controls important political decisions, the NLD and other political parties have to cooperate with the military, said Toe Kyaw Hlaing, an independent political analyst in Burma.

In 1990 elections, the army annulled the results after a landslide victory by the NLD. But that kind of response is not widely expected this time. The military is invested in the freed-up economy that semi-democracy has brought, as Western nations eased trade and investment sanctions in response to political liberalization. And the military always has its constitutional safeguards to fall back on.

Estimates by the NLD put it on pace with the 1990 landslide. Tin Oo, a senior colleague of Suu Kyi, told The Associated Press the party is likely to receive “nearly” 81 percent of the vote.

But the delay in announcing official returns has raised concern, with NLD spokesman Win Htein telling reporters that the election commission has been “delaying intentionally because maybe they want to play a trick or something.”

“It doesn’t make sense that they are releasing the results piece by piece. It shouldn’t be like that,” he told reporters after a party meeting at Suu Kyi’s house. “They are trying to be crooked.”

In Washington, State Department spokesman Mark Toner said it is still early days in the more than two-week period mandated for announcing election results, but the U.S. “wants to see the process move forward as quickly as possible.”

“The early results coming in seem to indicate a landslide for (Suu Kyi’s) party but I think it’s way too early to determine that and we are just going to wait and let the process play itself out,” Toner told reporters.

In her BBC interview, Suu Kyi was asked why she doesn’t expect the army to steal away her party’s election victory, as it did in 1990.

“They’ve been saying repeatedly they’ll respect the will of the people and that they will implement the results of the election,” she said. She added that Burma’s citizens are now politically more aware and that new forms of communications such as the Internet serve a watchdog function.

If the NLD secures a two-thirds majority of the parliamentary seats at stake—which appears a likely scenario—it would gain control over the executive posts under Burma’s complicated parliamentary-presidency system.

Although she is barred by the constitution from becoming president, Suu Kyi recently has said she will become the country’s de facto leader, acting “above the president,” if her party forms the next government.