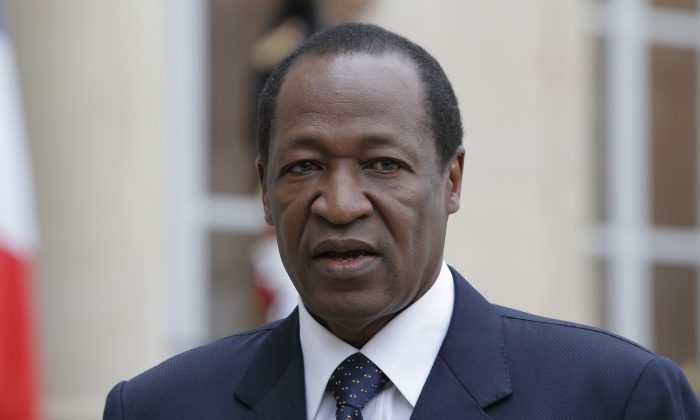 Burkina Faso President Blaise Compaore speaks to the media after a meeting with France's President Francois Hollande at the Elysee Palace in Paris on Sept, 18, 2012. President Blaise Compaore stepped down Friday Oct. 31, 2014 after 27 years in power and said elections would be held in 90 days following a wave of protests against his rule. The announcement, read out on television, was a sharp about-face from the day before, when protesters stormed the parliament but Compaore vowed to hold power through next year. (AP Photo/Francois Mori)
Africa

OUAGADOUGOU, Burkina Faso—Burkina Faso’s former president fled to neighboring Ivory Coast with his family after violent protests drove him from power after 27 years in office, Ivory Coast said Saturday, as a largely unknown military colonel said he had taken the helm.

President Blaise Compaore, his family and those close to him had been taken in by Ivory Coast, according to a statement from the office of President Alassane Ouattara. It did not elaborate. It said Ouattara was following events “with particular attention.”

Compaore stepped down Friday after protesters stormed parliament and set the building ablaze. His swift departure has left the impoverished Burkina Faso in a state of uncertainty.

Lt. Col. Issac Yacouba Zida said that the president’s resignation amid violent street protests was an “insurrection” and not a coup, and that Compaore and a top aide were both safe.

“Starting today I will assume all the responsibilities of this transition and of head of state,” he said in an announcement carried on radio early Saturday.

Zida was the second in command of the president’s security regiment. Having been inBurkina Faso’s ranks for more than two decades, Zida is close to the president and appreciated by lower ranking soldier.

Zida called on the international community including the African Union to “support our people during this difficult ordeal.” He had announced that the country’s borders had been closed, a transitional committee had been set up and the constitution had been suspended.

Gen. Honore Traore, the joint chief of staff, told a packed room of reporters on Friday that he would assume the presidency until elections were called. It was not immediately clear if Traore accepted Zida’s announcement Saturday.

When Compaore resigned Friday after protesters stormed parliament and set the building ablaze. He said a vote would be held in 90 days. Zida said the “length and makeup of the transitional body will be decided later.”

Burkina Faso hosts French special forces and serves as an important ally of both France and the United States in the fight against Islamic militants in West Africa.

The United States called on Burkina Faso’s military to follow “the constitutionally mandated process for the transfer of power and holding of democratic elections.”

“We condemn any attempts by the military or other parties to take advantage of the situation for unconstitutional gain and call on all parties to respect the people’s support for the democratic process,” State Department spokeswoman Jen Psaki said.

From The Associated Press. AP reporter Jamey Keaten in Paris contributed to this report.