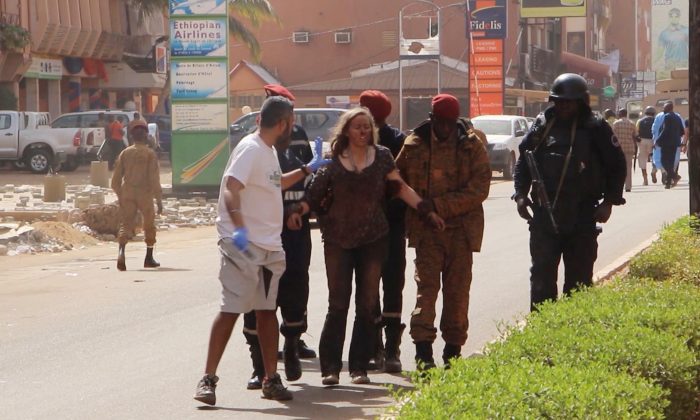 This image taken from AP television shows a woman being led to safety in Ouagadougou, Burkina Faso, on Jan. 16, 2016. (AP Photo)
Africa

OUAGADOUGOU, Burkina Faso—The al-Qaida fighters who stormed a popular hangout in Burkina Faso’s capital at dinnertime came with a mission to kill as many people as possible, firing at people as they moved to a nearby hotel and setting the cafe ablaze, survivors and officials said Saturday. When the gunfire stopped after a more than 12-hour siege, at least 28 people had been slain in an unprecedented attack on this West African country long spared the jihadist violence experienced by its neighbors.

Like the extremist attacks from Paris to Jakarta, the assailants in the Friday evening attack targeted an area where people from different nationalities gathered to enjoy life. Here in Ouagadougou, the victims had been grabbing a cold drink outside or staying at one of the capital’s few upscale hotels. In this city with a large aid worker presence, the attackers sought to shoot as many non-Muslims as possible, screaming Allahu akhbar (Arabic for God is great) as they entered.

An audio tape later released by the al-Qaida group claiming responsibility for the carnage was entitled: “A Message Signed with Blood and Body Parts.”

Among the victims from 18 different countries were the wife and 5-year-old daughter of the Italian man who owns the Cappuccino Cafe, where at least 10 people died in a hail of gunfire and smoke after the attackers set the building ablaze before moving on to the Splendid Hotel nearby. Some survivors cowered for hours on the roof or hid in the restaurant’s bathroom to stay alive. Two French and two Swiss citizens were confirmed among the dead late Saturday by the two countries’ foreign ministries.

The mother-in-law of an American missionary confirmed Saturday that he was among the dead. Carol Boyle said Michael Riddering, 45, of Cooper City, Florida, had been working in Burkina Faso since 2011. Riddering died in the Cappuccino Cafe, where he was to meet a group planning to volunteer at the orphanage and women’s crisis center he ran with his wife Amy.

Prime Minister Justin Trudeau said in a statement Saturday that six of the dead were Canadians.

Authorities said the four known attackers—all killed by security forces—had come in a vehicle with plates from neighboring Niger. At least two of them were women and one was of African descent. Witnesses said they wore the turbans often worn in the sand-swept countryside of the Sahel, and some spoke in French with an Arabic accent, suggesting some may have come from further north in Africa.

“I heard the gunfire and I saw a light by my window and I thought it was fireworks at first,” said Rachid Faouzi Ouedraogo, a 22-year-old accounting student who lives near the scene of the carnage. “I raced downstairs and once outside I saw people running through the street and four people firing on the people at Cappuccino.”

Burkinabe forces backed by French soldiers based in neighboring Mali managed to help free at least 126 hostages though officials have said the true number of those held hostage may be higher. Dozens were wounded in the overnight siege, including many suffering gunshot wounds.

“We appeal to the people to be vigilant and brave because we must fight on,” President Roch Marc Christian Kabore said on national radio Saturday.

The North Africa branch of al-Qaida, founded in Algeria, claimed responsibility for the bloodbath even as it was unfolding in a series of statements published and translated by the SITE Intelligence Group. The al-Qaida affiliate known as AQIM—now working in tandem with feared extremist Moktar Belmoktar—later released an audio clip it said was a conversation with one of the fighters later slain in Ouagadougou.

The message said the attack was directed at “the occupiers of our lands, the looters of our wealth, and the abusers of our security,” according to SITE and sought to punish them “for their crimes against our people in Central Africa, Mali, and other lands of the Muslims, and to avenge our prophet.”

Burkina Faso is a largely Muslim country though it is home to a number of French nationals as a former colony of France. Islamic extremists in the region have long targeted French interests, incensed by France’s military footprint on the continent more than a half century after independence. France led the military effort in 2013 to oust extremists from their seats of power in northern Mali, and continue to carry out counterterrorism activities across the Sahel region.

French special forces were also front and center early Saturday, as police and military forces fought to take back the Splendid Hotel. After freeing the hostages there, forces then scoured other buildings including the Hotel Yibi where they killed the fourth attacker, the president later said.

The horror closely mirrored the siege of an upscale hotel in Bamako, Mali in November that left 20 people dead and shattered the sense of security in the capital of a nation whose countryside has long been scarred by extremism.

Burkina Faso was better known for the role its president and officials played in mediating hostage releases when jihadists would seize foreigners for ransom in places like Niger or Mali. Now though, it appears Burkina, too, has been turned into a place where Westerners are at high risk.

On Sunday, Australia’s Department of Foreign Affairs and Trade said in a statement that an Australian doctor and his wife had been kidnapped in Burkina Faso’s north. The two were abducted from the town of Djibo near the border with Mali.

Australian media reported the couple are surgeon Ken Eliot and his wife Jocelyn. The couple are in their 80s and are originally from the Australian city of Perth. The reports said the couple have lived since 1972 in Djibo, near Baraboule, where they work in a volunteer medical clinic which they built.

Jihadists also hold a third foreigner: a Romanian national who was kidnapped in an attack last April that was the first of its kind at the time.

Some analysts point to the security vacuum that has emerged in Burkina Faso since late 2014, when the longtime strongman leader fled power in a popular uprising. Members of the military jockeyed for power, and the country suffered through a short-lived coup earlier this year before democratic elections were allowed to go forward in November.

Most in Burkina Faso recoil at the idea of extremism now taking hold here, adding to the woes of one of the poorest countries in the world.

“We know that the gunmen won’t get out of the hotel alive,” said one witness of the overnight siege, who gave only his first name, Gilbert. “Our country is not for jihadists or terrorists. They got it wrong.”