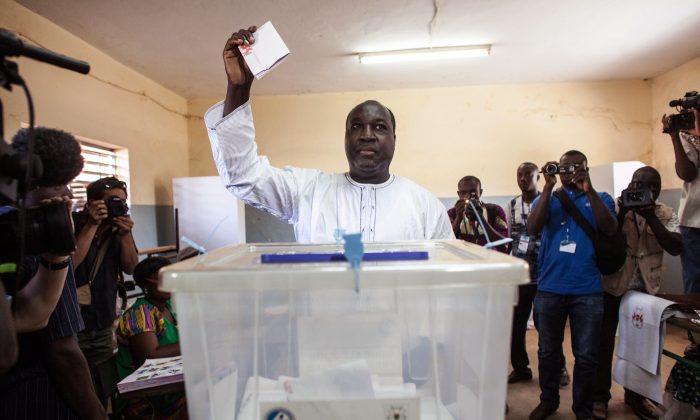 Many say the vote will be the most democratic in Burkina Faso’s history, because no incumbent is on the ballot and the presidential guard has been dissolved.

“I am happy to vote since there is no outgoing president and the elections bear my hopes of a better future with the president I am going to vote for,” said Tiama Gasse, a 50-year-old trader. He was among those voting at a primary school in Nakebzanga in Burkina Faso’s north.

Abdoulaye Sawadogo, an engineer at a road building company, said he hopes the new leader will address issues of employment, health and education.

A popular uprising in October 2014 forced President Blaise Compaore to resign after a 27-year rule. A transitional government was put in place, though it was soon at odds with Compaore’s elite presidential guard. The presidential guard staged a failed week-long coup in September that caused polls, originally scheduled for October, to be postponed.

Burkina Faso’s new electoral code bars presidential candidates who supported Compaore’s bid to change the constitution, though the ex-president’s party could have a strong showing in the legislative election.

Some 5.5 million people are registered to vote at more than 17,800 polling stations.

A candidate needs more than 50 percent of the vote to win outright and avoid a runoff, which would be held 15 days after first-round results are finalized.

More than 17,000 local and foreign observers are expected to monitor the poll, and 25,000 soldiers and police are being deployed.