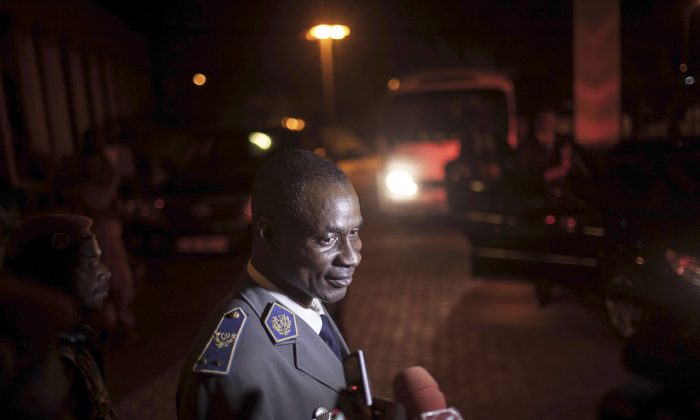 In this photo taken on Saturday, Sept. 19, 2015, Gen. Gilbert Diendere, who was named leader of Burkina Faso on Thursday, speak to media in Ouagadougou, Burkina Faso. (AP Photo/Theo Renaut)
Africa

OUAGADOUGOU, Burkina Faso — The Burkina Faso general who seized power in a coup last week apologized to the nation Monday and said he would hand over control to a civilian transitional government after the military warned that its forces would converge on the capital and forcibly disarm the soldiers behind the power grab.

Gen. Gilbert Diendere said his presidential guard unit “confirms our commitment to giving power back to civilian authorities,” in a communique issued to journalists. That was one of the key conditions of a draft agreement that resulted from weekend negotiations with regional mediators, but it had been unclear until his announcement whether the junta would abide by those terms.

Diendere, who led the presidential guard under longtime leader Blaise Compaore until he was forced from power in a popular uprising last year, said the compromises were necessary to avoid further bloodshed. The risk of clashes could lead to “chaos, civil war and massive human rights violations,” he said.

Earlier Monday, the heads of the National Armed Forces warned that troops would disarm the presidential guard. While they said soldiers aimed to do so without spilling blood, the ultimatum raised the specter of clashes on the streets of Ouagadougou.

“We demand that they put down their weapons and rejoin Camp Sangoule Lamizana,” the statement said, promising that the returning soldiers and their families would be protected.

People gathered at sunset cheering on the highway as they waited for the anticipated entry of Burkina Faso’s regular army, who vowed to disarm the presidential guard known as the RSP.

The soldiers who seized power last week are seen as loyal to ex-President Blaise Compaore. Diendere, the general installed as president Thursday, is a former top aide to the ousted leader.

Junta members said they were angered that members of Compaore’s former ruling party couldn’t take part in elections that were set for Oct. 11. Compaore was president for 27 years, and his bid to further extend his rule prompted massive street protests that led to his ouster.

The mediators led by the presidents of Senegal and Benin announced a plan late Sunday that calls for new elections by the end of November. The plan drafted by mediators is supposed to go before the West African regional bloc known as ECOWAS in Nigeria on Tuesday.

The streets of Ouagadougou remained tense Monday, and many demonstrators said they felt the ECOWAS compromise plan was too lenient on the junta.

French President Francois Hollande announced the suspension in a statement. He also threatened sanctions against anyone who opposes democratic elections, saying he would lobby European partners to do the same.

The U.S. State Department warned U.S. citizens against traveling to the country and advised those who are there to leave as soon as possible.