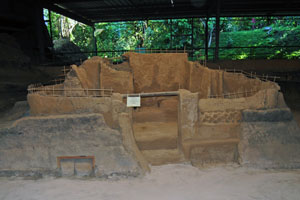 A volcano both destroyed and preserved the village of Cerén, including this house which probably belonged to a shaman. (David Lentz)
Science

U.S. archaeologists excavated the village of Cerén, discovered in the 1970s in El Salvador. A volcano destroyed the village over 1,400 years ago, and the volcanic ash preserved the plants effectively in that tropical area.

“What this meant for me, is this site had all these plant remains lying on the ground,” study lead author David Lentz, professor at the University of Cincinnati, said in a press release.

“Not only do we find these plant remains well preserved, but we find them where the people left them more than a thousand years ago, and that is really extraordinary.”

The scientists got their first glimpse of a Mayan kitchen, which included an intensively planted garden.

“We could tell what was planted around the houses,” said Lentz. “This is fabulous because people have long debated how the Maya did all this. Now we have a real example.”

Another new discovery was malanga, a root crop related to taro, which scientists didn’t know the Maya cultivated. The team also found grasses that don’t exist in that area anymore and a house containing over 70 ceramic pots.

In addition, they found a paved road called a “sacbe,” which Lentz plans to follow in the future to see if it leads to other interesting discoveries.

“It was tricky because we kept encountering things we’d never encountered before at a Maya site,” said Lentz. “They were just invisible because of the lack of preservation.”

“Cerén is regarded internationally as one of the treasures of the world,” he added.

“What’s been found there gives you a real idea of what things were like in the past and how humans have modified things. I think what we’re learning there is revolutionizing our concept of the ancient past in Mesoamerica.”

The findings are helping scientists understand the Mayas’ agriculture and how they lived with such a dense population. The research will be presented at the annual meeting of the Society for American Archaeology in Honolulu on April 3-7.