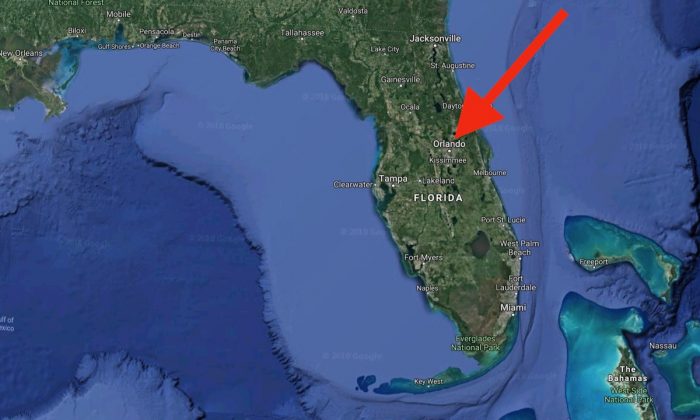 Orange County, Florida, where a bike shop owner tortured burglars after they broke into a bike shop. (Screenshot via Google Maps)
Crime and Incidents

Police responding to a bike shop break-in arrested two burglars, and three other people, including the bike shop owner.

Jose Gonzalez and Michael Eller admitted to breaking into the bike shop, but also told police how they were tortured for over two hours. Bike shop owner Robert Antley was waiting in the store with a gun in the early morning on the day of the burglary, WFTV reported.

Antley told deputies he slept in the store because of previous burglaries. He also said that he didn’t call 911 because his cell phone battery was dead and the store phone line was cut. He said that when his brother arrived he called 911, but deputies are unable to corroborate that, according to WFTV.

Gonzalez and Eller said that Antley held them at gunpoint and threatened to kill them, made them strip to their underwear, and beat them, according to WFTV.

“You are allowed to engage in conduct that is reasonable, necessary and lawful to protect yourself or your property, but one may argue that these efforts were neither reasonable nor lawful,” said WFTV legal analyst Bill Sheaffer, commenting on what the owner and other parties present did to the burglars, via the WFTV report.

Deputies said Eller and Gonzalez had face injuries and complained of being in pain. They also told deputies that while they were being “tortured and beaten” Antley and company took their personal items and looked at their cell phones, Click Orlando reported.

Eller and Gonzalez were in the store for an hour with Antley, and when Joshua Antley and Kathryn Pellicio arrived for work, the burglars underwent another hour of torture, according to News 6.

News of the incident was reported in October 2016 by WFTV, but was reposted on March 20 by Palm Beach Post and reported anew by Fox 8 on March 21.