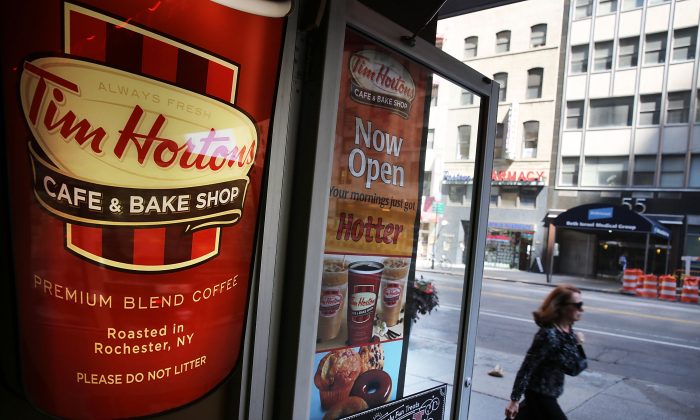 MIAMI—Burger King is in talks to buy doughnut chain Tim Hortons and create a new holding company headquartered in Canada, a move that could shave its tax bill and boost growth.

Shares of Burger King (+19.5 percent) and Tim Hortons (+19 percent) both jumped on Monday, after rumors of the billion dollar deal emerged. Tim Hortons currently trades at 82 Canadian dollars and is worth $10 billion.

“As a Tim Hortons shareholder, we would expect at least C$85 a share equivalent, which is about 2.75 shares of Burger King for every Tim Hortons share,” David Baskin, president of Baskin Financial Services, which controls about 180,000 shares in Tim Hortons, told Reuters. “I think that would be a fair premium. Much less than that and they’re going to start getting pushback from Canadian institutions.”

Most commentators were quick to point out Burger King is following health firms AbbVie and Medtronic, which recently bought Irish companies, to reduce its tax bill.

Such an overseas shift, called a tax inversion, has become increasingly popular among U.S. companies and a hot political issue. Burger King was founded in 1954 with a single restaurant in Miami, where it is currently based.

In a tax inversion, a U.S. company reorganizes in a country with a lower tax rate by acquiring or merging with a company there. Inversions also allow companies to transfer money earned overseas to the parent company without paying additional U.S. taxes. That money can be used to reinvest in the business or to fund dividends and buybacks, among other things.

Burger King and Tim Hortons cautioned on Sunday that there was no guarantee a deal would happen, and it’s not clear exactly how much a tie-up would reduce Burger King’s tax costs.

Charles Kolstad, a tax attorney with Venable, told Fox Business: “People continue to look at inversions because it makes sense from a shareholder value perspective.”

Because of different loopholes for income generated from overseas, becoming Canadian might lower Burger King’s tax rate to a level below its current rate. This could even reduce the combined company’s average.

“The deal would be structured as a tax inversion, which could see a more favorable treatment for Burger King’s foreign profits and create the third-largest global quick-service restaurant player,” Scotiabank analyst Patricia Baker wrote in a note to clients.

A recent KPMG report ranked Canada number one for “lowest overall corporate taxes and for digital services and R&D operations,” stating Canada’s tax burden on companies is just slightly over half of that of the United States.

However, companies and the stock market are not exclusively concerned with what is, but rather what happens in the future. Goldman Sachs estimates the total amount of pre-tax income to flee the United States in 2014 will be almost $15 billion, if all transactions are implemented—a record.

If companies fear higher taxes in the United States, after the mid-term elections for example, it makes sense for them to move abroad before and to a country where taxes are going down, not up.

Burger King said its majority owner, investment firm 3G Capital, would own the majority of shares of the new company if a deal were to happen.

3G Capital, which has offices in Brazil and New York, is known for its aggressive cost-cutting. The firm bought Burger King in 2010 and went to work trimming overhead costs and revamping operations before taking the chain public again in 2012. Last year, 3G also teamed with Berkshire Hathaway Inc. to take H.J. Heinz Co. private in a $23 billion deal, and has been cutting costs there as well.

Tim Hortons, known for its doughnuts and coffee, has been paired with U.S. fast-food chains in the past. It was purchased by Wendy’s International Inc. in 1995. Then in 2006 it completed an initial public offering and was spun off as a separate company.

Burger King and Tim Hortons say the deal would also allow the doughnut chain to accelerate its growth in international markets. The company had 4,546 restaurants at the end of June, with 3,630 in Canada, 866 in the U.S. and 50 in the Persian Gulf area. It could use Burger King’s existing infrastructure to expand internationally.

The companies say Burger King Worldwide Inc. and Tim Hortons Inc., based in Ontario, would continue to operate as separate brands but would share corporate services. The talks were first reported by The Wall Street Journal.

The new company would have 18,000 restaurants in 100 countries with about $22 billion in sales, which the companies say would make it the world’s third-largest fast-food restaurant company.