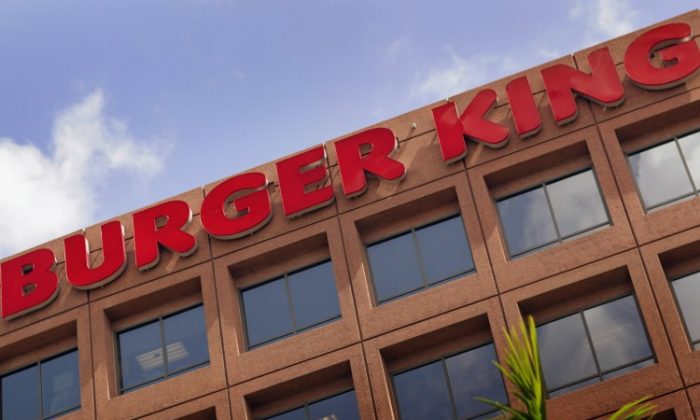 The Burger King headquarters building is seen as reports indicate the company may be considering a sale of itself on September 1, 2010 in Miami, Florida. (Joe Raedle/Getty Images)
Business & Economy

The world’s second largest hamburger chain, Burger King, began trading as a public company on Wednesday on Nasdaq under the symbol “BKW,” with shares gaining $0.62, or 4.3 percent from the starting price of $14.50 to $15.12 Wednesday afternoon.

The Miami-base company’s return to the stock market took place less than two years after it was taken private in a $3.26 billion sale to Brazilian investment fund 3G Capital Management LLC. The company is striving to make a comeback and compete against fast-food leader McDonald’s.

Burger King’s return to New York Stock Exchange did not go through an initial public offering. Instead, Justice Holdings Ltd., a London-based publicly traded company specifically set up to invest in another company, absorbed Burger King. In return, 3G will receive about $1.4 billion in cash under the deal and has retained about 71 percent of shares in the public company, leaving only 16 percent of shares available for sale to investors.

3G Capital will hold onto its stake for at least six months.