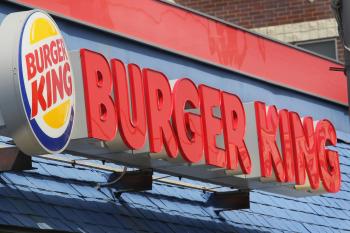 Burger King Holdings Inc. agreed to be sold to investment group 3G Capital for around $4 billion on Thursday, according to the company. (Scott Olson/Getty Images)
Business & Economy

Antonio Perez
View profile
Follow
biggersmaller
Print
Burger King Holdings Inc. agreed to be sold to investment group 3G Capital for around $4 billion on Thursday, according to the company.

The proposed deal values the fast food chain at $24 per share, a 46 percent premium over its Aug. 31 closing share price. The Miami-based company is the world's second largest hamburger fast-food chain behind McDonald's Corp. The overall $4 billion deal includes assumption of current debt.

Last week Burger King posted a 2.3 percent drop in quarterly sales around the world. The company has been outperformed by its rivals—most notably McDonald’s—in recent months. In mid-August the company’s shares hit record lows, bottoming out at $16.30 per share.

New York-based 3G is backed by a number of Brazilian investors, including the 48th richest person in the world, Jorge Paulo Lemann.

Burger King, currently led by CEO John Chidsey, which has been public since 2006, has more than 12,000 restaurants around the world in 75 countries.

Several reports have mentioned that British private equity firm 3i could be a potential buyer of the company. However, 3i soon dropped out of the bidding. Burger King has until Oct. 21 to solicit more bids from other interested parties.

The deal is likely going to heat up merger activity in the restaurants industry. Shares of Wendy's/Arby's Group Inc. rose on Thursday based on speculation that the world's No. 3 burger chain may have also interested suitors.