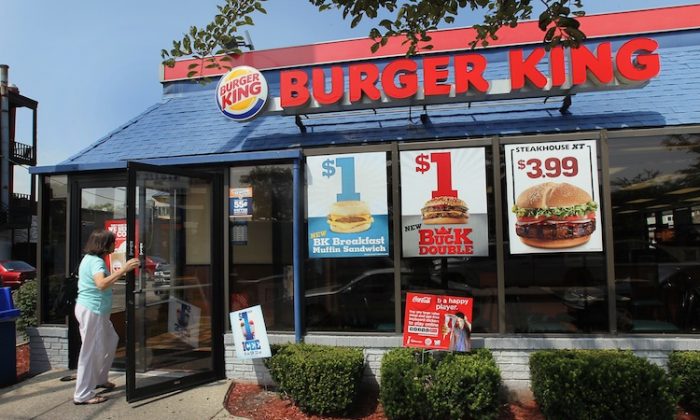 The move comes after similar actions by McDonald’s, Pizza Hut, and PepsiCo Inc.
By Naveen Athrappully

Fast-food chain Burger King, with around 800 fully franchised outlets in Russia, has decided to pause all corporate support within the country, joining other companies taking similar retaliatory measures following Moscow’s incursion into Ukraine.

In a statement March 10, Restaurants Brands International (RBI), the parent company of Burger King, said there are no corporate Burger King locations in Russia.

“The business is fully franchised and managed by a local master franchisee. Burger King has suspended all of its corporate support for the Russian market, including operations, marketing, and supply chain in addition to refusing approvals for investment and expansion,” the company stated.

Earlier, RBI had announced that it would redirect profits earned from franchised operations in Russia toward humanitarian efforts, beginning with a $1 million donation to the United Nations High Commissioner for Refugees (UNHCR).

Burger King committed $3 million to support Ukrainian refugees. The brand also announced that its franchises in more than 24 European nations will partner with local nongovernmental organizations to distribute free meal vouchers worth $2 million to the refugees.

McDonald’s has around 850 locations in Russia, with a majority being owned by the company. This means that McDonald’s is poised to suffer heavy losses by ceasing operations there.

“We expect this to be temporary, and we certainly don’t take this decision lightly. But for us, this is about doing what we think is the right thing to do, both for the global business and for our people locally,” Ozan said.

McDonald’s pledged to continue paying the roughly 62,000 employees who live and work in Russia during the work stoppage. The company will also pay employees’ leases and other expenses.

Yum Brands, parent company of KFC and Pizza Hut, also announced suspension of operations in Russia. The company pledged a $1 million donation to the Red Cross to support people affected by the Russia–Ukraine war. There are about 50 Pizza Hut locations and 1,000 KFC locations in Russia.

PepsiCo Inc. has suspended the sales of Pepsi-Cola, Mirinda, and 7UP soft drinks in Russia, and the company will cease all advertisement and promotional activities, as well as capital investments, in the country. However, PepsiCo Inc. said it will continue offering other products such as baby food and dairy products.

“By continuing to operate, we will also continue to support the livelihoods of our 20,000 Russian associates and the 40,000 Russian agricultural workers in our supply chain as they face significant challenges and uncertainty ahead,” said PepsiCo Inc. CEO Ramon Laguarta in a letter to associates March 8.