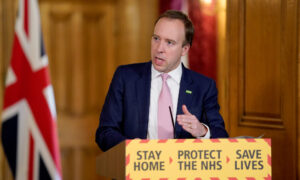 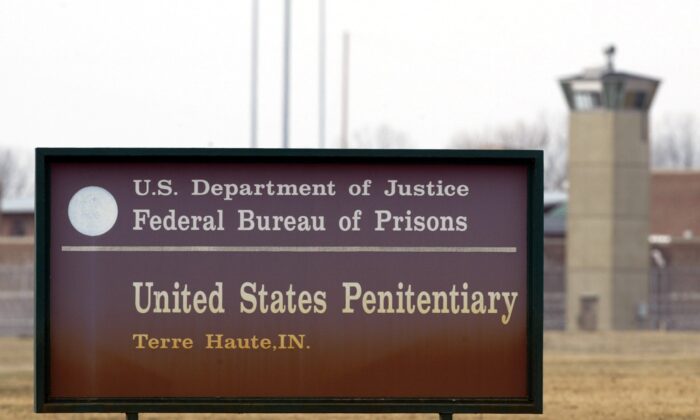 A guard tower flanks the sign at the entrance to the U.S. Penitentiary in Terre Haute, Ind., on March 17, 2003. (Michael Conroy/AP Photo)
AMERICA

The Federal Bureau of Prisons (BOP) said in a statement Monday that vaccine doses have now been delivered to 68 facilities across the United States.

As of Jan. 11, there are 5,530 federal inmates and 2,013 BOP staff who have tested positive for COVID-19 nationwide, according to a BOP tracker. To date, there have been 188 federal inmate deaths and 3 BOP staff member deaths attributed to COVID-19.

BOP said in late December that it would begin giving vaccinations to inmates, reversing a previously reported order that reserved doses for staff members. A Jan. 4 vaccination guidance document (pdf) notes that, in context of limited vaccine supply, staff have priority for receiving shots, with those who have potential close contact with those infected being first in line.

The guidelines say that, after offering vaccinations to all employees, institutions should proceed with offering the vaccine to inmates, with top priority given to those assigned as health service unit workers, followed by inmates over 65 and at higher risk of suffering severe illness from COVID-19.

It comes as the slow pace of the CCP (Chinese Communist Party) virus vaccine rollout has frustrated many Americans at a time when the pandemic death toll has continued to rise.

Seeking to smooth the vaccine rollout, President Donald Trump’s administration has asked states to release all COVID-19 vaccine doses, rather than holding some back. The administration had adopted a strategy of keeping some doses as a safety stock to guard against potential manufacturing issues.

“We’ve had so much success with quality and predictable manufacturing, and almost flawless distribution of the vaccine, but we have seen now that the administration in the states has been too narrowly focused,” Health Secretary Alex Azar said Tuesday on ABC’s “Good Morning America.”

Health officials said last year they projected 20 million Americans getting vaccinated against COVID-19 by the end of 2020, but that number ended up being under 4 million. Around 25.5 million doses of Pfizer’s and Moderna’s two-dose vaccines have been distributed in the United States, according to data from the Centers for Disease Control and Prevention (CDC), while just under 9 million doses have been administered as of Jan. 11.

Azar said that the Trump administration is also seeking to ramp up vaccine administration by widening the eligibility criteria for recipients and expanding the distribution network.