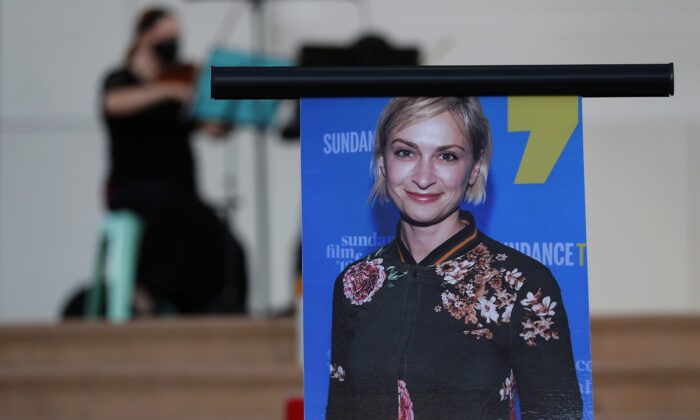 A musician plays a violin behind a photograph of cinematographer Halyna Hutchins during a vigil in her honor in Albuquerque, N.M., on Oct. 23, 2021. (Andres Leighton/AP Photo)
Southern California

LOS ANGELES—A candlelight vigil is planned in Burbank today for cinematographer Halyna Hutchins, who was killed when actor Alec Baldwin fired a prop gun on a New Mexico movie set in a shooting that has sparked renewed calls for stepped-up safety on film sets.

The vigil is scheduled for 6-7:30 p.m. Sunday at the International Alliance of Theatrical Stage Employees Local 80 headquarters at 2520 W. Olive Ave.

“Let’s all take a moment and gather together to honor Halyna and her accomplishments and grieve together as one. Please bring your own candle, and join together for a candlelight vigil for Halyna,” International Cinematographers Guild Local 600 announced on Facebook.

Another vigil for Hutchins was held Saturday night at the Albuquerque Civic Plaza in Albuquerque, New Mexico.

Baldwin has expressed “shock and sadness” over the death. Hutchins, 42, died at University of New Mexico Hospital in Albuquerque following the on-set mishap Thursday. The film’s director, Joel Souza, 48, was also injured, but was treated and released from the hospital.

“There are no words to convey my shock and sadness regarding the tragic accident that took the life of Halyna Hutchins, a wife, mother and deeply admired colleague of ours,” Baldwin wrote on his Twitter page Friday morning.

“I’m fully cooperating with the police investigation to address how this tragedy occurred and I am in touch with her husband, offering my support to him and his family.”

Baldwin, 63, was rehearsing a scene outside a church on the set of the western “Rust” south of Santa Fe, New Mexico, Thursday when he discharged the prop weapon. Sheriff’s officials were continuing to investigate what happened. Baldwin is a producer of the film.

The death of Hutchins has again renewed concerns about on-set safety. The Los Angeles Times reported Friday that a half-dozen camera crew workers had walked off the “Rust” set hours before the fatal shooting, protesting working conditions, including long hours, safety conditions and issues getting their paychecks. The paper reported that Hutchins had been advocating for safer conditions for her team.

One person who was on the set told the newspaper that there had been two recent misfires involving the prop gun, and one the previous week.

Late Friday, The Associated Press obtained an affidavit in support of a search warrant in Santa Fe, New Mexico, in which investigators stated that first assistant director Dave Halls picked up one of three guns from a mobile cart that had been prepared by the production’s armorer, Hannah Gutierrez Reed.
Halls allegedly declared “cold gun,” meaning the weapon was not loaded, as he was handing it to Baldwin. The shooting occurred moments later.

In a striking coincidence, Halls was also the first assistant director on the second unit of 1993’s “The Crow,” when that film’s star Brandon Lee was fatally shot with what was supposed to be a blank round but turned out to be a deadly bullet, according to the Los Angeles Times.

The Times also reported that on the 911 call recording, obtained by the Albuquerque Journal, script supervisor Mamie Mitchell presumably refers to Halls when she says, “He’s supposed to check the guns. He’s responsible for what happens on the set.”

TMZ reported that the set’s gun handler, Hannah Reed, expressed concern over her relative lack of experience in a podcast last month after working on “The Old Way,” a Nicolas Cage film.

“You know, I was really nervous about it at first, and I almost didn’t take the job because I wasn’t sure if I was ready, but, doing it, like, it went really smoothly,” Reed said in a “Voices of the West” podcast.

Meanwhile, a petition on Change.org is calling for an end to the use of real guns on all movie sets.

“We need to make sure that this avoidable tragedy never happens again. There is no excuse for something like this to happen in the 21st century,” the petition states. “Real guns are no longer needed on film production sets. This isn’t the early 90’s, when Brandon Lee was killed in the same manner. Change needs to happen before additional talented lives are lost.”

In response to Hutchins’ death, the showrunner of the ABC police drama “The Rookie” announced that “live” weapons would no longer be used on the set, according to The Hollywood Reporter.

Showrunner Alexi Hawley announced the change in a memo to the show’s staff, saying “all gunfire on set will be with airsoft guns with CG muzzle flashes added in post. There will be no more ‘live’ weapons on the show. The safety of our cast and crew is too important. Any risk is too much risk.”

The “Rust” production company issued a statement Thursday saying, “The entire cast and crew has been absolutely devastated by today’s tragedy, and we send our deepest condolences to Halyna’s family and loved ones.

“We have halted production on the film for an undetermined period of time and are fully cooperating with the Santa Fe Police Department’s investigation. We will be providing counseling services to everyone connected to the film as we work to process this awful event.”

Souza released a statement to NBC Saturday, saying he was “gutted by the loss of my friend and colleague” Hutchins.

“She was kind, vibrant, incredibly talented, fought for every inch and always pushed me to be better,” he said.