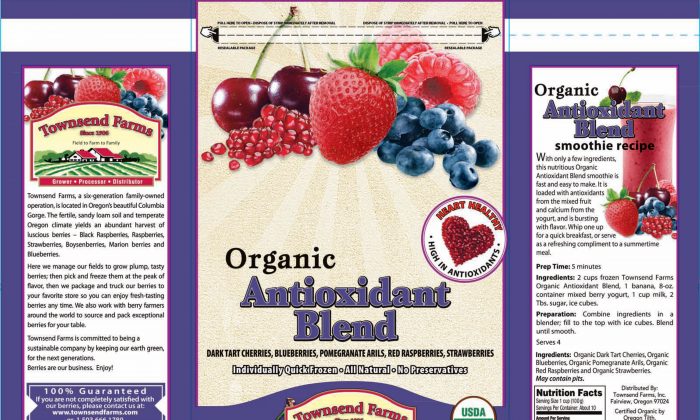 This handout image provided by the Food and Drug Administration shows the label of Townsend Farms of Fairview, Ore., Organic Antioxidant Blend. The Oregon company is recalling a frozen berry mix sold to Costco and Harris Teeter stores after the product was linked to at least 34 hepatitis A illnesses in five states. (AP/FDA)
US

LOS ANGELES—A Burbank man has sued Costco, claiming he got hepatitis A from frozen berries that have been linked to illnesses in eight states.

City News Service says Greg Patterson’s lawsuit is at least the fifth filed in California against the store chain and Oregon-based Townsend Farms.

His attorney, Ron Simon, says Patterson contends he developed symptoms in May, lost 20 pounds, missed a month of work and is still receiving medical treatment.

Federal authorities say the Townsend Farms organic berry blend sold at Costco has been linked to more than 100 hepatitis A cases. No deaths have been reported.

Townsend recalled the mix. Costco pulled it from shelves last month and offered vaccinations to about 240,000 customers who bought it.