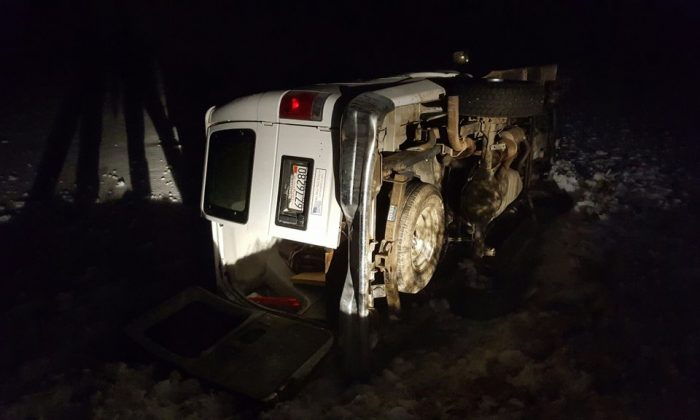 Bundy Militia Member Cited in Hines, Oregon for Driving Without License After Accident

A Bundy militia member was cited for driving without a driver’s license after the white van he was piloting flipped over.

Darrow Burke, 57, was going too fast around a 25 miles per hour corner and flipped the van, destroying a barbed wire fence, according to the incident report.

The state police said via Twitter that “icy roads” caused the early morning crash near Highway 20 in Hines, near Burns in Oregon.

Burns is where the Bundy militia has taken over federal buildings in a quest to force the government to turn the lands over to local ranchers.

While Burke was driving without a license, he was not arrested.

“Oregon only cites for No Operator’s License, we do not arrest,” State Police Spokesman Bill Fugate told Oregon Public Broadcasting.

The outlet says that Burke has been part of the occupation, but occupation spokesman LaVoy Finnicum said he wasn’t aware of Burke.

“Don’t know the name, sorry,” he said. “There are a lot of people coming and going.”

Burke was not injured, reported The Oregonian.

The Ukiah, California resident hitched a ride back into Hines with the tow-truck driver.