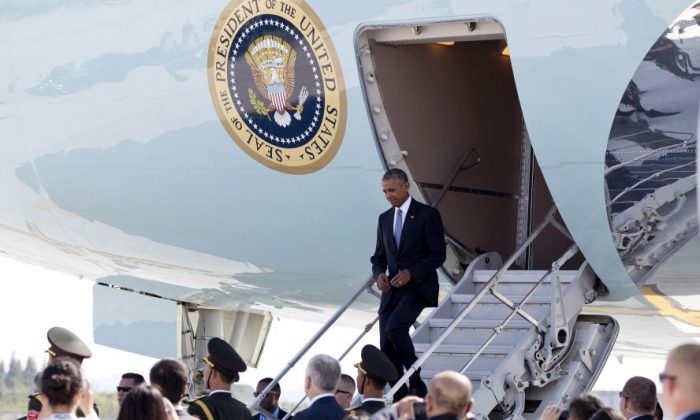 Bumpy Beginning for Obama in China, Starting on the Tarmac

HANGZHOU, China—If President Barack Obama was hoping for a graceful start to his final trip to Asia as commander in chief, this wasn’t it.

Confrontations between Chinese officials and White House staff and other diplomatic dust-ups were out in the open from the moment Air Force One landed in Hangzhou, where world leaders were attending an economic summit.

The first sign of trouble: There was no staircase for Obama to exit the plane and descend on the red carpet. Obama used an alternative exit.

On the tarmac, a quarrel broke out between a presidential aide and a Chinese official who demanded the journalists traveling with Obama be prohibited from getting anywhere near him. It was a breach of the tradition observed whenever the American president arrives in a foreign place.

When the White House official insisted the U.S. would set the rules for its own leader, her Chinese counterpart shot back.

“This is our country! This is our airport!” the Chinese official yelled.

The dispute escalated when a Chinese official tried to keep Susan Rice, Obama’s national security adviser, away from her boss. Rice, one of the highest-ranking officials in U.S. government, seemed less than amused when asked about it by a reporter.

“They did things that weren’t anticipated,” she said.

Obama, reflecting later on the squabbling, said it wasn’t the first time it had happened. But he acknowledged hosting huge summits like the Group of 20 can be overwhelming and said the issue isn’t limited to China.

“We don’t leave our values and our ideals behind when we take these trips,” Obama said. “It can cause some friction.”

Tense exchanges continued after Obama started his program of meetings in Hangzhou. An Associated Press reporter was denied entry to a climate change ceremony because a credential list used a common nickname, though he was eventually allowed in after the U.S. Embassy intervened. Two Chinese officials—one working to assist the American delegation—had to be physically separated after trying to hit each other outside an event.

Brusque interactions and last-minute disagreements about protocol are not uncommon when the U.S. leader visits China, where there’s an expectation that government ground rules be followed without question, no matter how rigid. Despite public protestations, the U.S. has had little success persuading China that it’s in its interest to be more tolerant of scrutiny by the public or the press.

“We don’t make apologies for pushing a little bit harder when it comes to press access,” Obama said.

Why the G-20 Agenda Misses the Point
TOP NEWS