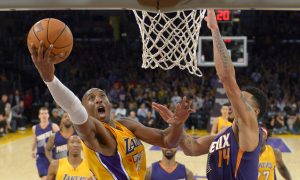 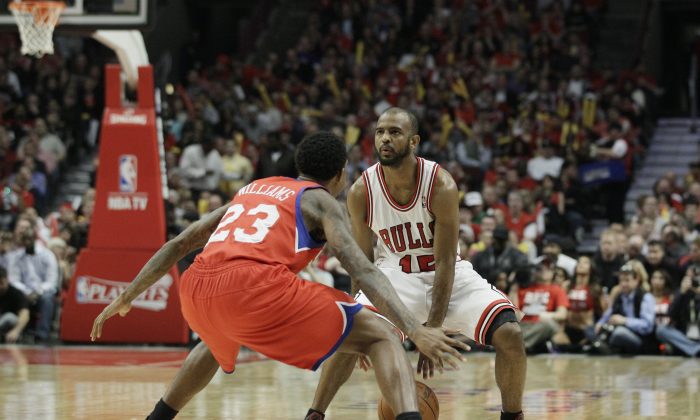 Chicago Bulls guard John Lucas III (15) looks to a pass during the third quarter of Game 5 in an NBA basketball first-round playoff series against the Philadelphia 76ers in Chicago on Tuesday, May 8, 2012. (AP Photo/Nam Y. Huh)
NBA

The Chicago Bulls season is ramping up, as are the news and rumors about the team.

John Lucas III is currently a free agent and is looking for a long-term place to call home.

That place could be the Bulls, where the seven-year veteran had his best season in the 2011-12 season.

The Bulls only have 14 players on the roster, and could use another guard.

Kirk Hinrich and Aaron Brooks both play point guard behind Derrick Rose, but all Rose and Brooks have already been dealing with injuries while the Bulls also lack an established backup shooting guard behind Jimmy Butler.

That means Hinrich will likely see some time at shooting guard, opening up the need to more depth.

League sources told RealGM that Lucas wants to return to the Bulls.

“John has received interest from different teams, but to say he has declined any formal offers would be inaccurate,” Lucas’ agent, Bernie Lee, said.

“John is in a situation, after a crazy summer, of trying to make the right decision versus any decision, but he is willing to prove himself as requested. John owes a tremendous amount of his value in the NBA to the opportunity Chicago’s front office gave him there initially. Over time, it’s become clear that Gar Forman has a unique ability to find value in obscure places: He signed John out of China, and he might be the best in the NBA at this. In some ways John was at the beginning of this.”

Ray Allen, the veteran shooter, is also a possible signing.

Allen was reportedly spotted in Chicago recently, sparking rumors that he’s thinking about signing with the Bulls.

The Chicago Tribune said that the Bulls have been in touch with Allen.

“The Bulls have stayed in contact with Allen’s representatives to see if he will play this season. If he chooses to, they’d certainly add another shooter,” it said.

Allen can play point guard at a pinch but is really best as a shooting guard. He lacks the height to play small forward in anything but spot minutes.

He’s received interest from many of the top teams in the league, including the Cleveland Cavaliers, the Heat, and the Washington Wizards.

Confidence in Brooks Paying Off

Derrick Rose is struggling with injuries, but several players have stepped up in his absence–principally Aaron Brooks.

The point guard has bounced around the league the last couple of seasons, but has finally found a place in Chicago.

“From the moment Brooks signed with the Bulls over the summer, [coach Tom] Thibodeau has raved about the diminutive point guard. He loves Brooks’ toughness, he loves his ability to create offensively, he just loves his game,” reported ESPN.

“Over the course of just a few short months, the pair has formed a bond that will be hard to break over the course of the season. That bond was evident again on Saturday night as Brooks scored 26 points, 19 in the fourth quarter, in the Bulls’ 106-101 loss to the Boston Celtics.”

Brooks noted that he was lacking confidence and that he needed a coach to believe in him.

“Even when I doubted myself, he was there to tell me, ‘You know what? I’ve watched you play, you’ve done well’ and just to keep working hard,” Brooks said.

“It’s been a breath of fresh air for me.”

“I love the guy because he’s tough as nails,” Thibodeau said recently.

“You can start him, you can play him big minutes, you can play him in the fourth quarter, he’s going to battle people and he’s going to make the right play. He’s got a high IQ. When he gets into the paint he knows where everyone is and he knows what everyone can do. And he leads guys into their strengths, covers up their weaknesses, he’s just tough. He’s a very good player, so I’m very pleased with what he’s done.”

CHICAGO—A few days into the regular season, the short-handed Boston Celtics and Chicago Bulls already are in grind mode.

Emergency starter Evan Turner scored 19 points, one of seven Boston players in double figures, as the Celtics passed an early test with a 106-101 victory on Saturday night. The Celtics did it without Rajon Rondo, who missed his fourth game of the season.

“Listen, we had to play great tonight, and we did for the better part of the game,” Celtics coach Brad Stevens said after his team’s third game in four days. “Then Aaron Brooks went nuts at the end. You knew they were going to make a run. I’m just glad we didn’t play a 49-minute game.”

“We just kind of had to weather the storm, make some plays,” Olynyk said. “E.T. hit some big shots. We got some big rebounds and just found a way.”

The game was the fourth for the Bulls in five days and their second straight with injured guard Derrick Rose out of the lineup. As usual, Thibodeau wasn’t in the mood for excuses after what he described as a “low-energy” first half.

“No, it was not (because of) four games in five nights,” Brooks offered. “We just played badly. I think they were on the same schedule we had.”

Specifically, Thibodeau was concerned about a 45-38 rebound disadvantage. “We have to do something to change it,” he said.

Joakim Noah had a team-high 11 rebounds but sat out the final 2:03 because of what Thibodeau called “restrictions.” Neither would say whether they were related to a minute limitation or complications from Noah’s left knee surgery six months earlier.

The Celtics seized control in the final 6 minutes of the second period, which they closed on a 27-8 run to take a 56-41 lead into the break. Avery Bradley scored nine and Turner added six more in the decisive stretch.

Boston bolted to a 12-2 lead at the outset, as Chicago misfired on 10 of its first 11 field goal tries. After a time-out, Gasol sparked a comeback that saw his team connect on 10 of its final 13 shots in the period to take a 25-20 advantage.

But the Bulls couldn’t sustain the momentum, and when Tyler Zeller scored off Bradley’s lob pass midway through the third quarter, the Celtics took a 36-35 lead that wasn’t seriously threatened until the final minute.

“We have to get a lot better,” Stevens said. “Obviously, we have to get healthy. It was the second night of a back-to-back for both teams. I don’t think they played as well as they’ve played, and I thought we did some really good things, but we have to play more (complete) 48 minutes.”

Celtics: Turner filled in for Rondo, who remained in Boston to have screws removed from his surgically repaired left hand. Rondo could be available for the date with Oklahoma City on Wednesday night. Smart is expected to miss two-to-three weeks because of a sprained left ankle and bone bruise, which he suffered in a victory against Indiana on Friday night. “(Smart) feels better, but it’s going to take a couple weeks to get back,” Stevens said. “And that’s hopeful, because sometimes those high ankle sprains are much more difficult than that.”

Bulls: Rose sat out with sprains in both ankles. Veteran Kirk Hinrich started in his place but went scoreless in 13 minutes. “Just out,” Thibodeau said of Rose’s status. “He’s not ready to go yet. We’ll see where he is tomorrow.”

Given the abundance of injuries around the league thus far, Thibodeau said it was “a good question” whether star players would sit out long stretches of the regular season with the playoffs in mind. “There’s no way to tell until there’s an extended study based on 20 years or so,” he said. “There’s a school of thought that you have to prepare for the grind of the long season. When you study championship teams, you see that commitment to it.”