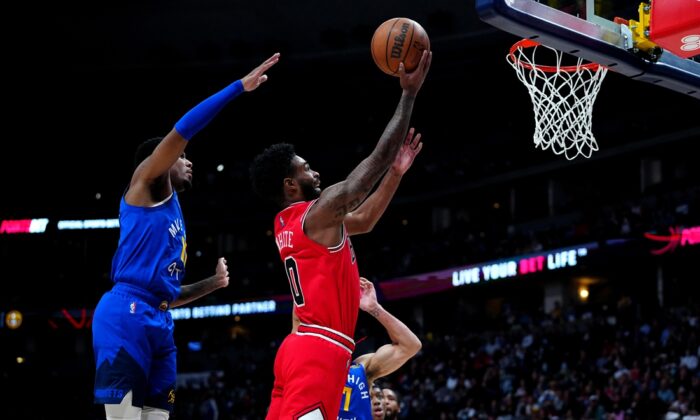 Derrick Jones Jr. had 16 points and Ayo Dosunmu had 10 for the Bulls.

Aaron Gordon had 28 points and nine rebounds, Will Barton scored 23, and Facundo Campazzo recorded 16 for the Nuggets, who played without Nikola Jokic.

The reigning NBA Most Valuable Player sprained his right wrist in Denver’s loss to the Philadelphia 76ers (+6.5) on Thursday night and was not active Friday night. Coach Michael Malone said before the game that he didn’t think it would be a long-term issue.

Denver played inspired early, taking a 12-point lead in the first quarter and leading for most of the first half before the Bulls carried a 53–52 edge into halftime.

Chicago came out strong in the third quarter. DeRozan hit a long jumper, LaVine drove for an uncontested dunk, DeRozan scored inside and Tony Bradley hit a short jumper during an 8–0 run that opened the second half. The Nuggets missed two shots and had two turnovers in the first two minutes of the third to contribute to the nine-point deficit.

Barton broke the drought with a floating jumper, but LaVine answered with a 3-pointer to make it 64-54.

Denver got within six after 3-pointers from P.J. Dozier and Bones Hyland, but the Bulls extended the lead to 88–78 heading into the fourth quarter.

The Nuggets held Chicago without a point for the first 3:26 of the fourth and crawled back into it. Dozier made two free throws and a layup and JaMychal Green scored on a putback to cut the deficit to 88-84.

The Bulls pushed the lead back to eight, but Denver got back within four. LaVine scored the next seven for Chicago to make it 101–93 with 3:47 left.

The Nuggets got within 108–105 with 55.4 seconds left, but DeRozan hit two free throws to extend the lead. Barton sank a corner 3-pointer with 29.4 seconds left before DeRozan sealed the outcome by making free throws in the final 12 seconds.