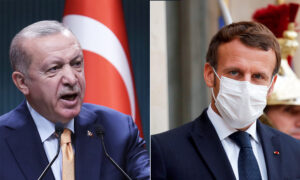 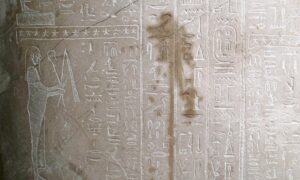 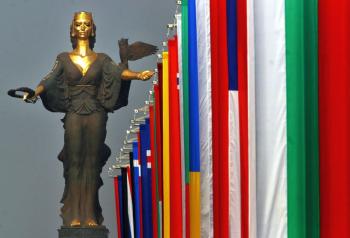 The flags of NATO member countries are raised in front of the statue of Saint Sofia in central Sofia, April 2, 2004. The U.S. plans to erect a missile defense shield in Eastern Europe to intercept missile attacks from Iran an Korea. Russia opposes the plan accusing the U.S. directing the sheild against it. (Dimitar Dilkoff/AFP/Getty Images)
Europe

By Kremena Krumova
Print
SOFIA, Bulgaria—Plans for a U.S. missile defense shield in Eastern Europe continue to spark Russian opposition. In the latest, Bulgaria found itself having to give an explanation to Russia after it indicated willingness to host missile interceptors in the country.

In response to what Russia called the "Bulgarian surprise," Bulgaria's president, Georgi Parvanov said on Saturday that there had been no official talks between Bulgaria and Washington on hosting the missile shield. At the same time, Parvanov did say his country supports the idea of Bulgaria being part of an Eastern Europe NATO missile shield, protecting the country from possible attacks.

The row started after U.S. ambassador to Bulgaria, James Warlick said that Bulgaria "has a place in the U.S. missile defense shield" last week. That prompted Russia to summon the Bulgarian ambassador to give an explanation on Thursday.

“For us, the situation is still not understandable with controversial statements from Bulgaria regarding positioning on its territory elements of the U.S. missile defense shield,” spokesperson of the Russian foreign ministry, Andrey Nesterenko, was quoted by Russian ITAR-TASS news agency.

While Washington has insisted the missile defense system is to intercept possible attacks from Iran or North Korea, a Russian top general accused the U.S. earlier this month of directing the missile shield against Russia.

“This shield is not directed against threats coming from Russia. On the contrary, the threats that exist for us equally exist for our Russian friends,” said Bulgarian Defense Minister Mladenov on Bulgarian television.

Although the two countries were close allies during the Cold War, relations between them have shifted with Bulgaria becoming a member of both NATO and the European Union. Relations between the former allies are relatively friendly at present, but can hinge on Bulgaria’s dependence on Russian natural gas resources and its export market.

Earlier this month, on Feb. 4, Romanian President Traian Basescu said that his nation’s Supreme Defense Council had “approved Romania to take part in the anti-rocket shield system of the U.S.”

Now that Romania and Bulgaria have shown willingness to host a missile system, Russia renewed its threat on Friday to place its Iskander missiles on the Russian exclave of Kaliningrad, situated between Poland and Lithuania, if it felt that there was a direct European threat to Russia.

A threat which was initially pulled back in September last year after U.S. President Barack Obama put the plans from its predecessor, George W. Bush, to place an anti-missile radar facility in the Czech Republic and interceptors in Poland on hold.