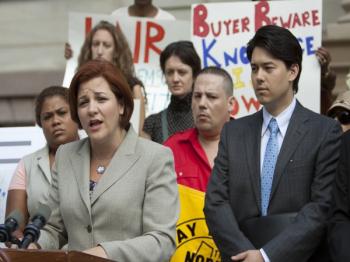 UPSET: Bronx residents protest at City Hall on Thursday over poor living conditions in their buildings.(Henry Lam/Epoch Times Staff)
US

The Baer Architecture Group conducted an assessment of the 10 properties owned by Milbank Real Estate who defaulted on their $35 million mortgage in 2009. According to city Council Speaker Christine Quinn, after foreclosure proceedings were initialed by Wells Fargo and LNR Partners Inc., they found the income from the rent was insufficient to maintain their portfolio. Now LNR is reportedly selling the properties to an anonymous buyer, transferring the debt and leaving the units in disrepair.

James Jantarasami, an attorney from Legal Services NYC said LNR has stalled in court for months and that they have refused to pay for repairs. He says he plans to hold the new owner accountable by filing 7A proceedings.

Severe water leaks, mold, cracked and peeling lead paint, and collapsing ceilings are among some of the violations documented in the report, which estimates it would take from $19.7 upward to $24.7 million to fix, a sum close to the mortgage value.

“The sale must be stopped,” said Quinn on the steps of City Hall. “It will do nothing to make these buildings livable.”

“Having reports detailing the repairs and the cost is essential to helping these tenants,” said Quinn in a statement.

Director of Organization of Urban Homesteading Assistance Board (UHAB) Dina Levy said the report reveals the “real” value of these buildings and empowers residents by giving them concrete evidence of the damage in their buildings to aid them in future proceedings.

“Arming tenants with concrete information that allows them to better advocate on their own behalf is exactly in line with the self-help philosophy that is at the core of UHAB’s mission,” said Andrew Reicher, executive director of UHAB in a statement.

The report and these residential buildings are being used as a pilot project for what Quinn calls a “Predatory Equity Task Force” monitoring problems from the housing fallout. She said these investigations will be conducted throughout the five boroughs as complaints come in and will continue to identify problems with foreclosed buildings.