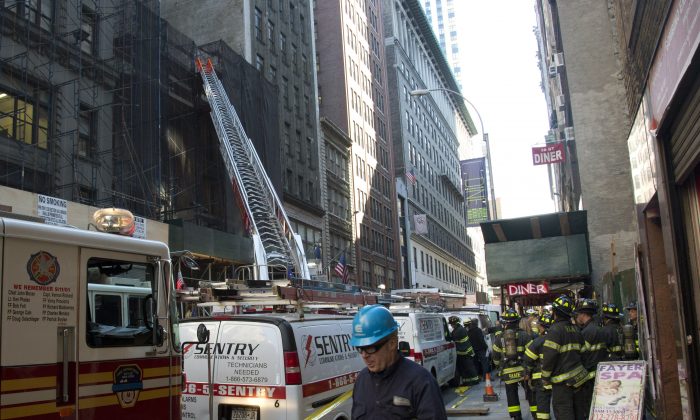 Firefighters gather at the site where a building being demolished to make way for a luxury boutique hotel partially caved in, killing one construction worker and trapping at least one other beneath the rubble midtown Manhattan, Friday, Oct. 30, 2015, in New York. (AP Photo/Bebeto Matthews)
New York

NEW YORK (AP) — A building being demolished to make way for a luxury boutique hotel partially caved in Friday in midtown Manhattan, killing one construction worker and trapping at least one other beneath the rubble, officials said.

The collapse was reported just before 10:30 a.m. at an eight-story building on West 38th Street, the Fire Department of New York said. Fire trucks and ambulances were at the scene, and police had cordoned off the street. Crews were in contact with the trapped worker and attempting to free him.

What exactly collapsed wasn’t clear from the street. Scaffolding and netting were still up on the building, and there was no sign of rubble or visible damage.

According to buildings department records, the site is owned by Fortuna LLC. A woman who answered the phone at Fortuna Realty Group’s office declined to comment and referred calls to Northeast Service Interiors, a demolition company doing work at the site. Northeast said its owners were at the site and couldn’t immediately respond to a telephone call.

According to Fortuna’s website, it acquired the property in late 2012 and is planning a 27-story, 170-room luxury boutique hotel there. City Buildings Department records show a permit for full demolition of the existing building was issued in May. It appears some construction has been in the works since then — permits have been issued for sprinkler systems, electrical work and other things.

The buildings department said it was on the scene investigating and didn’t yet have details.

Robert Bankston, a demolition contractor who formerly worked on the site, said the two neighboring buildings were sound when the project began.

“It wasn’t like the buildings were falling down,” said Bankston, who noted that demolition needs to be done carefully to avoid creating risks of collapse, such as by overloading floors with heavy debris.

He said his company left the project about a month ago amid a financial disagreement with the general contractor.

At least 60 firefighters responded to the collapse.