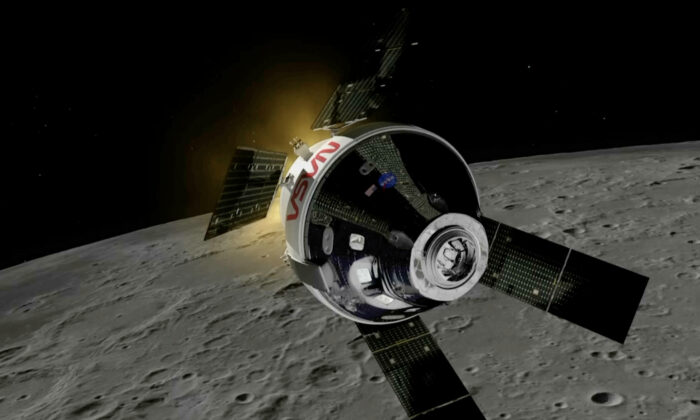 A still from an animation of the Artemis 1 mission, of a spacecraft leaving Earth and traveling to the Moon. (European Space Agency via AP/Screenshot via The Epoch Times)
Space

The Orion spacecraft is a vital element of NASA’s Artemis program, which aims to land the first woman and the next man on the moon by 2024.

The European Space Agency is overseeing the development of the European Service Module (ESM), the part of the Orion spacecraft that provides air, electricity, and propulsion.

In a launch expected early 2022, Orion and its attached ESM-1 are expected to fly near the Moon, but not land, as part of an uncrewed test.

ESM-1’s main engine and 32 thrusters will propel Orion into orbit around the Moon and then back to Earth.

“The first mission will bring us uncrewed to the Moon, and the second vehicle is then a vehicle which will bring, NASA is planning four astronauts to the Moon, just circling around the Moon,” explains ESM chief engineer Matthias Gronowski.

“And then the third one—that’s the one which is bringing the first astronaut and the first man and woman back and again, after Apollo, to the Moon.”

ESA says ESM-2 is nearing completion and will soon be transferred to the United States.

Aerospace firm Airbus has developed and built the high-tech propulsion modules on behalf of the European Space Agency (ESA) in Bremen, northern Germany.

Engineers are building on experience of developing the Automated Transfer Vehicle (ATV), which was used to ferry supplies to the International Space Station.

“It’s not the first time that we are assembling a big spacecraft for human-rated flights. So, we know the processes how to do that,” says Airbus project manager Rachid Amekrane.

In February, earlier this year, ESA said it had signed a contract with Airbus for a further three more European Space Modules at a cost of around 650 million euros ($754 million). They’ll be built in Bremen.

Future missions will carry astronauts, with the goal of building an outpost just beyond the Moon that could enable lunar landings and Mars expeditions.

“The service module is really key for the Orion vehicle and for NASA achieving the Artemis mission,” says ESM program manager Philipp Deloo.

NASA named its Moon program Artemis after the twin sister of Apollo in Greek mythology, who is the Greek goddess of the moon.