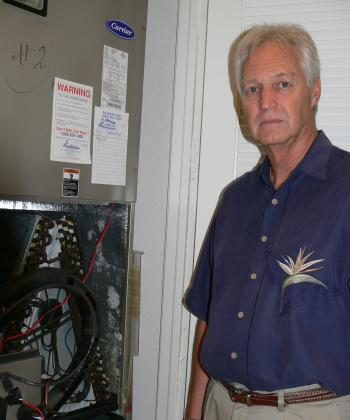 Gary Schultheis stands next to the blackened coils of an air conditioning unit in his Parkland, Florida, home. Schultheis and his wife, Mary Ann, traced their health problems and the chemical smell permeating their home to tainted Chinese drywall. (Linda Li/The Epoch Times)
US

In the United States hundreds of thousands of homes have been built with Chinese drywall that emits toxic sulfur gases which corrode wiring, wrecking air conditioners and other appliances and even contaminating fabric and wood.

A Toronto lawyer says his firm is preparing to launch a class action lawsuit on behalf of Canadians whose homes may have been contaminated by the drywall. But industry officials are not sure any made its way into the country.

While it is unknown if Canadians have been caught in the latest “Made in China” scandal, lawyer Ted Charney of Falconer Charney LLP says his firm intends to file a suit if homeowners in Canada do in fact have the drywall in their homes.

“We haven’t directly been retained to pursue the litigation as of yet, although we suspect it will happen in the next week or two,” says Charney.

The gases, which smell like rotten eggs and can tarnish gold and silver, also make people sick. Those who have had the drywall installed in their homes complain of nosebleeds, breathing problems, dizziness, headaches, fatigue, and irritated eyes.

“We think the components are sulfur dioxide and sulfur trioxide, both of which morph into cyanide or sulfuric acid, which certainly would explain the upper respiratory problems people are having. It punches holes in your lungs, gives you COPD (chronic obstructive pulmonary disease) or emphysema, etc. The health implications are horrible,” says Thomas Martin, president of America's Watchdog.

A consumer advocacy group based in Washington D.C., America’s Watchdog has set up a Chinese Drywall Complaint Center which has been swamped with hundreds of phone calls and emails a day, mostly from the U.S. but also from Canada and other countries, Martin says.

The organization has been inspecting houses and condominiums in various states, collecting information and talking to homeowners. Martin says that after about six weeks of “sniffing drywall in people’s attics,” he himself began having nosebleeds and a constantly runny nose.

Since the first news reports on the problem drywall appeared in Canada in late february, Martin says his organization has received about 500 calls and emails from people in British Columbia and Alberta who believe they have it in their homes.

However, building industry officials in Canada are largely unaware of any tainted Chinese drywall having entered the country.

“We haven’t heard of anything showing up in Canada at all,” says Peter Simpson, executive director of the Greater Vancouver Homebuilders Association.

“When I first heard about it I wanted to get to the root of it, and I made many, many phone calls to people within the industry who are directly related to the drywall industry, and they all expressed surprise that this is even a story and that they had never heard of it,” he says.

“I’m not saying there wouldn’t be people out there looking for a deal,” he adds, “but all the legitimate guys—they wouldn’t touch that stuff with a barge pole.”

Murray Corey, executive director of the B.C. Wall and Ceiling Association which represents North American drywall manufacturing companies, says “not one single piece of concrete information has been brought forward” that would help substantiate whether the drywall has been used in Canada.

“We in the industry here have no knowledge of it, and I can guarantee you that if we had knowledge of it we’d be talking about it, because I represent the companies that make drywall here and the last thing we want to see is any kind of inferior product getting into the market.”

Nevertheless, Charney maintains that the Chinese drywall could still be making its way into Canada.

“The conventional building supply companies that supply the large volumes for the big builders don’t seem to have been involved. But that doesn’t mean that there hasn’t been a lot of it that’s come in the country, it just means that it hasn’t gone through those sources.”

Neither the Canada Border Services Agency nor Health Canada responded by deadline to requests for comment.

The chemicals residing in the wallboard in some cases are so pervasive that that as few as three or four sheets may be enough to contaminate a home to the point it could have to be bulldozed, Martin says.
The company identified as manufacturing much of the tainted drywall is Knauf Plasterboard Tianjin Co. Ltd. Its parent company, Knauf Gips, is headquartered in Germany and has four manufacturing plants in China.

Much of the toxic drywall is thought to have entered the U.S. during the construction boom starting in 2004 when domestic materials were in short supply. Demand skyrocketed with the large amount of reconstruction following hurricanes Katrina and Wilma.

“They couldn’t find plywood, and they couldn’t find enough drywall. But we didn’t have that experience here, that didn’t happen to us,” says Corey, adding that Canadians who contacted America’s Watchdog could either have a case of mouldy drywall or merely want to “jump on the bandwagon of a class-action suit.”

News reports say that the water used to mix the gypsum was possibly wastewater that contained chemicals, including sulfur. According to
Daniel Reid who represents Intuitive Environmental Solutions of Fort Meyers, Florida, at least some of the drywall imported to America from
China was manufactured with waste materials from scrubbers on coal-fired power plants.

"There's a lot of it out there. We're finding more and more [Chinese drywall]," says Reid, who has inspected more than 40 homes.

The drywall allegations are the latest in a series of harmful “shoddy products” made in China, including milk formula, toys, toothpaste, pet
food, tires, cough syrup, drugs, and seafood.

Martin sees it as just more evidence of the lack of quality control, regulation and oversight in China’s manufacturing industry. He suspects the toxic drywall has also made its way to Australia and many European countries.

“We need to have an international conference because I think when the world wakes up and realizes it’s in Europe, it’s in Australia, the UK, Ireland, Canada, I think the world is going to demand from China stricter standards as far as what they export,” he says.

Two U.S. senators have filed legislation seeking a recall of the drywall and an immediate ban on defective building products from China.Florida Governor Charlie Crist has been urged to pronounce a state of emergency over the issue.

“This will go down in history as the worst case of product defects ever,” Martin says.