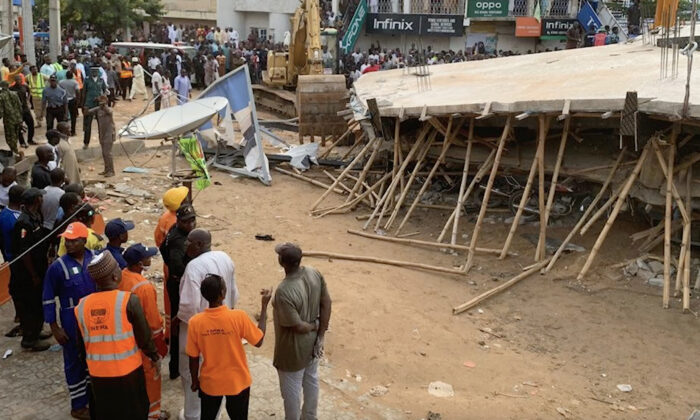 ABUJA, Nigeria—A three-story building under construction collapsed Tuesday in northwestern Nigeria, trapping shoppers in a busy neighborhood. Emergency response workers told the Associated Press that at least eight people have been pulled from the rubble and they were searching for more.

The building in Kano state, northern Nigeria’s commercial hub, was being constructed as a business center though businesses were already operating on the ground floor, said Nura Abdullahi, head of Nigeria’s National Emergency Management Agency in Kano.

So far, “no casualties yet [and] eight people have been rescued” from the rubble with varying injuries, Abdullahi said, adding that the rescue operation was continuing. Abdullahi said authorities have not yet confirmed the number of people trapped inside the structure.

Videos apparently recorded at the scene showed a large crowd trying to catch a glimpse of the debris pile as rescue workers arrived with tools.

“Five minutes after I left there, I was under there, it just came down. I just thank God I am alive now,” said Enoch.

Rescue operations continued late Tuesday with excavators and assistance from dozens nearby.

On social media, Nigerians urged authorities to take action against the trend of building collapses across the country.

In the last year, there have been more than 10 building collapses in this West African nation, often with authorities being accused of failing to enforce building safety regulations. Lagos, Nigeria’s largest city, recorded five such collapses last year, including in November when more than 40 people died when a high rise still being constructed crumbled on workers.