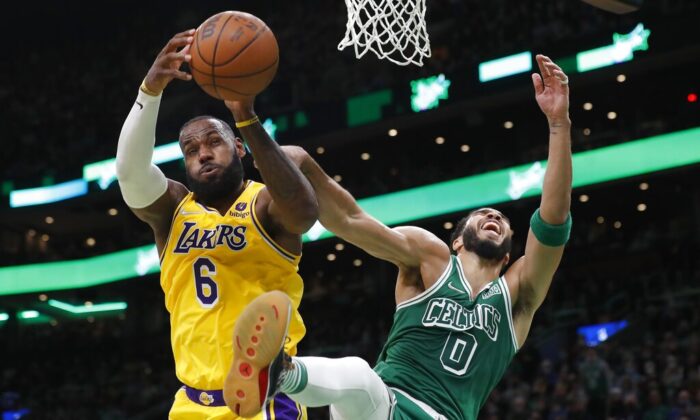 Los Angeles Lakers' LeBron James (6) and Boston Celtics' Jayson Tatum (0) battle for a rebound during the first half of an NBA basketball game, in Boston, on Nov. 19, 2021. (Michael Dwyer/AP Photo)
Viewpoints

Build Back Better—Punishing the GOAT

There are always winners and losers when Congress increases taxes or tries to make the Internal Revenue Code fairer. Fair is always a moving target. Build Back Better targets the most successful professional athletes.

While it’s hard to feel sorry for the highest compensated athletes within a highly compensated professional sports industry, one does wonder whether anyone has considered the new tax rates that these athletes will face with Build Back Better. One must also wonder whether the increased tax rates will result in decreased contributions to charity, as the increased tax rates provide no benefit for charitable giving.

Let’s call our super-star athlete Bob and assume Bob is married, is a California resident, and has a $55 million salary and $45 million in endorsement income. The endorsement income likely comes via a Subchapter S corporation and is included in Bob’s tax return as ordinary income.

Under current law, after the first $650,000 of taxable income, Bob pays 37 percent to the Federal government on every dollar earned, and after $1 million of taxable income, he pays 13.3 percent to the State of California. Essentially, Bob pays income taxes at a rate of 50.3 percent on every dollar earned before his charitable contributions and a few other minor deductions. Today, with a little rounding, Bob pays $50 million in income taxes.

Build Back Better adds another 5 percent to Bob’s income taxes for every dollar of taxable income over $10 million and an additional 3 percent for every dollar over $25 million. And, along with the additional 8 percent, the endorsement income is going to be subject to yet an additional 3.8 percent tax for Medicare. Bob’s total federal tax increase will be $8.5 million. (If he can and does take advantage of California’s work-around to the state and local tax deduction limitation, that will save him about $1.5 million.)

If Bob plays in the NBA, he will play about 50 of his 82 games just to pay his income taxes. Sometime beginning in March of a season that begins in November, he’ll be earning money for himself and his family.

Previous to Build Back Better, the Internal Revenue Code has encouraged charitable contributions via a deduction that reduces taxable income. Build Back Better takes its cut off the top. Taking more money from the top athletes will undoubtedly result in less money for charity.

Who will pay? That’s an interesting question. The short answer is that to offset the after-tax loss of almost $9 million to taxes, Bob needs an increase in salary of about $21.6 million to about $76 million per season. That would get Bob’s salary to about $1 million per game. When passed along to fans, the salary increase would be a pretty big hit to ticket prices. Of course, Bob is not the only athlete earning huge salary and endorsement income. The Golden State Warriors have four players making over $10 million per year; the Los Angeles Lakers have three players making more than $35 million per year. Ultimately, the fans pay the players’ salaries (which includes their taxes).

It’s difficult to feel sorry for any individual earning tens of millions of dollars after income taxes. But paying 60 percent of one’s earnings in income taxes during a very short earnings career is a substantial burden.

Players’ taxes are ultimately paid by the fans in higher ticket prices or even more television advertisements during games.

All taxes are ultimately paid for by consumers. Be it an increase in the income taxes for the GOAT making them the G-TOAT or an increase in corporate taxes, the ultimate taxpayer is always the consumer.