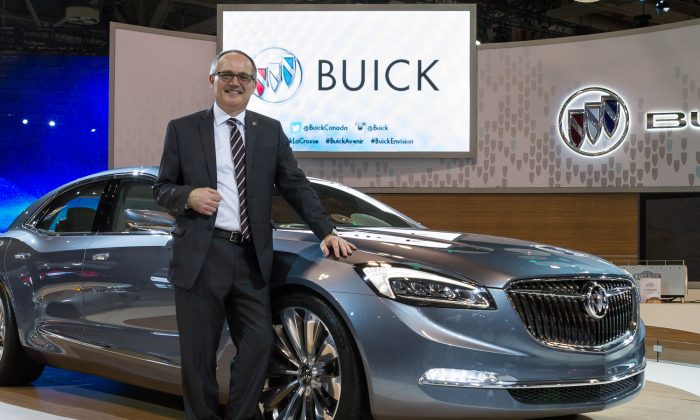 Buick: An Iconic Brand That Made Changes – and Thrived

An interview with Mike Speranzini, brand director of Buick Canada
By David Taylor

Founded in 1899 in Jackson, Michigan, Buick is one of the oldest automobile brands in the world—and the oldest in North America. Traditionally built for a discerning customer who desired the prestige of a premium marque but were not quite able to achieve the once-hallowed heights of aspiration originally reserved for Cadillac owners, Buick carved out a very nice niche for itself.

As a part of venerable General Motors, sales and general demand for the brand had faltered in recent years; there was always a belief that this brand could and indeed would undergo a change, a metamorphosis that would soon see Buick back in the good graces of the parent company. Through a focused and concerted effort, today Buick is hitting sales targets that are the envy of many mainstream brands.

Epoch Auto sat down recently with a man who has made his career within the General Motors family for close to 32 years—Mike Speranzini, brand director of Buick Canada. A few years back, Speranzini was invited to take the reins of Buick Canada and the successful turnaround of a once-staid brand continues.

Epoch Auto: With a gauntlet been thrown down and the perception in the marketplace that Buick, an established brand, built cars your father would buy, how do you account for this seemingly sudden about-face?

Mike Speranzini: Looking at Buick as a standalone, mature marque, the challenges have been many. For years Buick associated as a solid, trustworthy product, although perhaps more appealing to an uncle even [more so than] your father. Now there is a move toward a more diverse demographic. Yet, how do we continue to appeal to our core, established customer, without alienating them and appealing to a younger, more diverse demographic and present greater relevance?

First, we had to be able to come to terms with who we were, what we had become. We had to convince consumers we were no longer associated with “floaty boats”—large sedans that cruised on our roadways with a cushion-like feeling. In fact, our research showed that there was a false familiarity with our brand: we were still liked, but perhaps not for the best reasons. There was even some confusion within our core consumers. Buick produced sedans, good quality and robust vehicles—just not for me!

Mr. Speranzini: Perhaps “drastic” is too strong a word. We had to break through the clutter. Our advertising and marketing campaigns had to be different. We needed to resonate with the auto-buying public. We needed to get ahead of the message—accept the old perception—and then shrug it off with a new image. Hearing what the buying public was saying, some things became almost obvious, others, not so much. Changing a perception within a mature culture is not an easy task. As an engineering-oriented company with depth in marketing, we had the skills and the desire to work the research and arrive at designs that consumers would notice. Hence the almost self-deprecating “That’s not a Buick!” campaign.

Epoch Auto: For a while it seemed that Buick was everywhere: on the Internet, television, radio, newspapers, and magazines. The foundation was being laid but also built upon quickly.

Mr Speranzini: So much so that we experienced a reversal from mostly negative perception to positive in a relatively short time frame. The timing for this was right. Within the automotive industry, there had never been such an astounding turnaround in a short cycle. It was unprecedented.

Epoch Auto: Let’s step back a little and examine another back story. Buick’s foray into mainland China occurred much sooner than the brand’s reinvention.

Mr. Speranzini: Right. Buick has enjoyed success in this market for many, many years. What we learned in doing business there has had an enormous impact on this company globally. In China, Buick is everything it wants to be in North America. Technology is very important to this consumer. The nameplate is seen as among the hottest luxury brands in that exploding marketplace. In 2015, Buick sold more than 1 million vehicles in that market. In fact, it was the third most successful brand in China in 2015.

Sales of Buick products for 2016 appear to be heading in excess of the 2015 numbers. We now have a 5.1 percent market share in mainland China. Buick even enjoys some rich historical ties. The last emperor, Pu Yi, owned two Buicks. The last provisional president, Sun Yat-Sen, regarded as the father of modern China, had one. So did the first premier Zhou Enlai. Buick established itself as an aspirational brand. American-manufactured Buicks have traditionally sold well in China. Now Buick is building a global vehicle, the Envision, a crossover intended for many disparate markets. In fact, recently, Motor Trend in China declared that the Buick Envision is the best new SUV sold in China and is a volume-seller.

Epoch Auto: So, can or will this enthusiasm for a mature marque be duplicated in this country?

Mr. Speranzini: What works in one market may not necessarily be repeated in another. The average age of new car buyers in China is 30 – 35 while in North America, Canada, it’s more like 45. Buick is developing marketing strategies that align with the Chinese-Canadian communities in Canada – especially in the Greater Vancouver and Toronto areas. With the introduction of the Chinese-built Envision, a compact luxury crossover SUV, we have the perfect vehicle for the community. Neither too big nor too small, the aspirational aspect of the purchase, prevalent in mainland China, we see continuing here.

Building Vehicles That Appeal to New and Existing Customers

Epoch Auto: We read that although overall (sales) numbers of automobiles are increasing in Canada, the sale of sedans is declining – while crossover (CUV) and sports utility vehicles (SUV) rise.

Mr. Speranzini: To be clear, we’re not halting the production of cars! However, we have learned to adapt to the market, to prevailing trends and conditions. Take the Encore, for example. It has appeal to young, educated women who want a smaller urban vehicle, that’s easy to navigate in city traffic, more than capable on highways, and is also pleasing to the eye. Aesthetics are important. Buyers appreciate the comfort, the “spa-like experience,” of this vehicle’s interior.

In China, the Buick brand has a different role; consumers have a different perception. The vehicles are marketed based upon technology, performance and handling. In Canada we have new immigrant consumers from mainland China who are used to the Chinese-style of selling. We cannot just cut and paste strategies or tactics, however: we need to build upon the foundation from the home country and adapt as conditions prevail or dictate. There are opportunities and we need to continue to work a clear and determined plan.

Epoch Auto: What do Chinese-Canadians, from a Buick standpoint, look for, and even expect?

Mr. Speranzini: It’s all about value and tech. Things that establish the brand as premium product, such as a 360-degree camera, adaptive cruise control, and lane departure warnings—features and technology which can make you a better, safer driver. Connectivity is also important and with the availability of Apple Car Play and Android Auto built in, there is an extension of familiar applications from their smartphones at their fingertips. When a Chinese-Canadian looks for performance it’s more about efficient, economic engines, braking, and general handling. Does the vehicle feel right? It’s not necessarily about acceleration off the line.

Epoch Auto: It appears that community involvement is a key component to Buick Canada’s short and long-term plans. Tell our readers a little more about one such initiative.

Mr. Speranzini: Being a part of a community is crucial to our plans and goals as an organization. Our community activity allows us to contribute and give back, too. Obviously, being involved at a grassroots level, we can talk to customers, discover what’s important. Education is very important to Buick Canada—and I mean at the school, specifically high school—level. These days, schools and school boards are finding funds for extracurricular activities tight. We can help. Buick Canada initiated a program, Buick Drive for your Students.  Buick dealerships are teaming up with schools across Canada to host one-day test drive events to raise money to fund field trips, sports equipment—whatever the school deems necessary to further student’s goals. Buick will donate $20 for every valid test drive taken. In fact, up to $10,000 can be raised for a school from a single event. In 2016, Buick will write cheques for over $500,000.

Epoch Auto: Sounds as if you are taking nothing for granted. Thank you for your time.