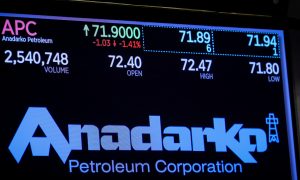 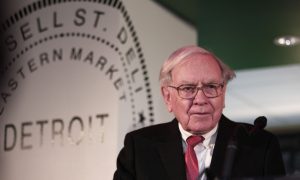 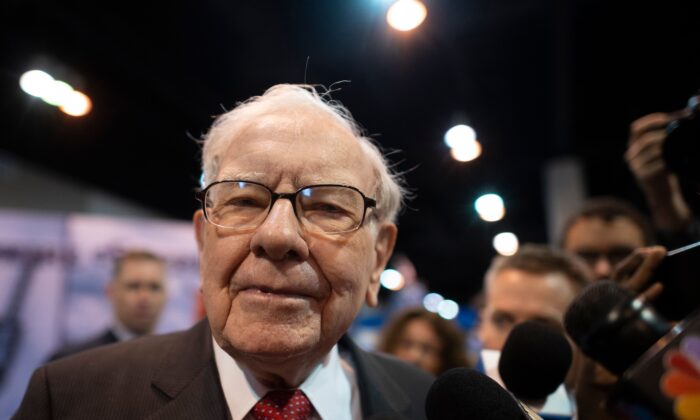 Warren Buffett, CEO of Berkshire Hathaway, speaks to the press as he arrives at the 2019 annual shareholders meeting in Omaha, Neb., May 4, 2019. (Johannes Eisele/AFP/Getty Images)
Companies

Berkshire, which owns companies including Geico auto insurer, Burlington Northern Santa Fe railroad, Dairy Queen, Duracell, and many other financial, industrial, and consumer firms, has been hit hard by the COVID-19 pandemic. Just like the rest of the market and economy.

The company said in a regulatory filing Saturday morning that before the United States was hit by the CCP (Chinese Communist Party) virus commonly known as novel coronavirus in mid-March, many of Berkshire’s businesses were posting revenue and earnings increases compared to a year ago. But that quickly changed.

“As efforts to contain the spread of the COVID-19 pandemic accelerated in the second half of March and continued through April, most of our businesses were negatively affected, with the effects to date ranging from relatively minor to severe,” Berkshire said in the filing.

The company’s overall revenue rose slightly from the year-ago quarter, to $61.3 billion. But Berkshire said Saturday that the essential businesses it owns—its railroad, utilities and energy, and insurance units, “slowed considerably in April.”

And the company added “several of our retailing businesses and certain manufacturing and service businesses are being severely impacted due to closures of facilities where crowds can gather, such as retail stores, restaurants, and entertainment venues.”

As a result of the massive shift in consumer behavior, Berkshire said that various subsidiaries have had to furlough employees, cut hourly wages and salaries, and reduce capital spending plans in order to preserve capital.

“While we believe that these necessary actions are temporary, we cannot reliably predict when business activities at our numerous and diverse operations will normalize,” the company said. “We also cannot predict how these events will alter the future consumption patterns of consumers and businesses we serve.”

Most of the Berkshire losses were attributable to the enormous drops in the value of the companies that Berkshire owns in its investment portfolio rather than in declines in sales and profits at its own subsidiaries.

Berkshire said it wrote down the value of its equity investments by a whopping $54.5 billion. Its operating earnings, a measure that Buffett prefers to focus on, rose nearly 6 percent to $5.9 billion in the quarter.

Shares of Berkshire Hathaway are down nearly 20 percent so far this year.

Buffett is arguably most famous as an investing guru. Berkshire Hathaway currently owns large stakes in top American blue-chip companies Apple, Bank of America, Coca-Cola, Wells Fargo, and Kraft Heinz. He is currently worth about $72 billion according to Forbes.

Berkshire Hathaway has had large losses in the past, but those were attributable more specifically to its own investments rather than a downturn in the broader economy.

Just over a year ago, the firm posted what was until now its largest loss because of difficulties at its Kraft Heinz unit, where sales were hit hard in as shoppers increasingly shunned processed foods, The company posted a more than $25 billion net loss in the fourth quarter of 2018 as it wrote down that position.

Investors now are wondering whether Berkshire will look to invest even more in top U.S. firms in light of the COVID-19 outbreak. After all, the company is sitting on a gigantic pile of cash and disclosed Saturday that it now has $137.3 billion on its balance sheet.

Berkshire Hathaway’s shareholder meeting takes place Saturday afternoon, and Buffett will take questions from shareholders and a few reporters in a virtual meeting that will be livestreamed exclusively on Yahoo Finance.

The CNN wire and Epoch Times staff contributed to this report.