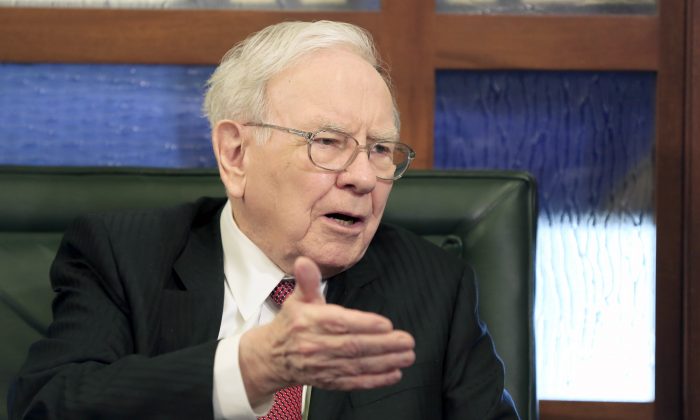 Berkshire Hathaway Chairman and CEO Warren Buffett speaks during an interview with Liz Claman on the Fox Business Network in Omaha, Neb., on May 4, 2015. (AP Photo/Nati Harnik)
Business

OMAHA, Neb.—The United States’ economy is in better shape than the presidential candidates make it seem, investor Warren Buffett said Saturday, even though businesses like his still face challenges.

In his annual letter to Berkshire Hathaway shareholders, Buffett didn’t name specific candidates or issues, but noted that the negative drumbeat about the economy, health care reform and income inequality may get voters down about the future.

“It’s an election year, and candidates can’t stop speaking about our country’s problems (which, of course, only they can solve),” he said, adding later, “that view is dead wrong: The babies being born in America today are the luckiest crop in history.”

Buffett noted that there will still be economic troubles as business evolves, but that the country needs to make sure it has a solid safety net to help people who lose jobs.

“The answer in such disruptions is not the restraining or outlawing of actions that increase productivity. Americans would not be living nearly as well as we do if we had mandated that 11 million people should forever be employed in farming,” he wrote.

Buffett pointed out that change also creates challenges for Berkshire’s businesses. For instance, its BNSF railroad is certain to haul less coal in the future and Geico insurance could be hurt by driverless cars.

He assured shareholders that Berkshire’s businesses will adapt just as the company did when its original Berkshire Hathaway textile operation failed.

Buffett’s letter is one of the most well-read documents the business world each year because of his successful track record and his knack for explaining complicated subjects in simple terms.

Buffett said the book value of Berkshire’s businesses improved 6.4 percent last year even as its stock price fell 12.5 percent. When dividends are factored in, the S&P 500 gained 1.4 percent by comparison. Buffett has warned that it will be increasingly hard for Berkshire to continue beating the market because the company is so large.