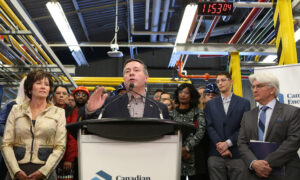 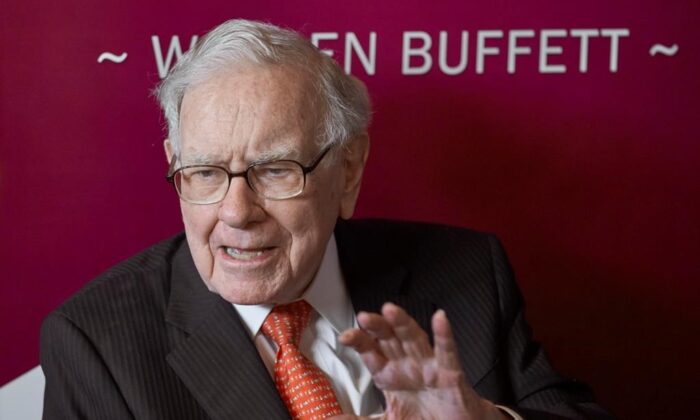 Warren Buffett, Chairman and CEO of Berkshire Hathaway, speaks during a game of bridge following the annual Berkshire Hathaway shareholders meeting in Omaha, Neb., May 5, 2019. A new report is holding up legendary investor Buffett's decision to walk away from a proposed liquefied natural gas project in Quebec in March as one sign that the LNG sector in Canada and elsewhere is on shaky ground. (Nati Harnik/The Canadian Press via AP)
Canada

OTTAWA—Legendary investor Warren Buffett’s decision to walk away from a proposed export terminal for liquefied natural gas in Quebec is being held up in a new report as a sign that the LNG sector in Canada and elsewhere is on shaky ground.

The Global Energy Monitor report released Monday says Buffett’s move in March underscores the growing political and economic uncertainty that LNG projects are facing even as governments around the world tout liquefied natural gas as a clean alternative to coal power.

Canada has emerged as a major proponent of expanding liquefied natural gas as a way to fight climate change abroad and create jobs and revenue at home, with numerous multibillion-dollar projects to facilitate LNG exports to Asia and elsewhere in the works.

Neither Buffett nor Berkshire Hathaway explained their reasons for the move, but the company behind the terminal project blamed “the current Canadian context”—an apparent reference to nationwide rail blockades and protests against the Coastal GasLink pipeline in B.C. at the time.

“While many projects face opposition from local communities, the case of the Energie Saguenay LNG Terminal in Quebec shows the potential for a local protest to galvanize a national movement,” said the Global Energy Monitor report.

Global Energy Monitor is an international non-governmental organization that catalogues fossil-fuel infrastructure around the world and advocates for more investments in renewable energy.

The report goes on to suggest that political opposition is only one of many new challenges to the LNG sector, with another being a dramatic drop in the price of gas due to an oversupply at a time when the COVID-19 pandemic has sent demand plummeting.

The result: plans to build pipelines, terminals and other infrastructure in Canada and around the world have been put on hold—or dropped entirely.

The report lists 13 LNG projects in Canada alone that have been cancelled or suspended in recent years. That includes a $10-billion LNG export facility in Nova Scotia, which is now in limbo as the company behind the project tries to decide whether to move ahead or not.

One of those apparently not affected is LNG Canada’s Coastal GasLink pipeline, which was the target of this year’s protests and blockades over a route that crosses traditional Wet’suwet’en territory in British Columbia. The company said last month that it plans to have 2,500 people working on the 670-kilometre pipeline from Dawson Creek to Kitimat by September.