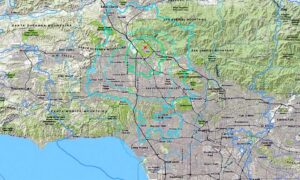 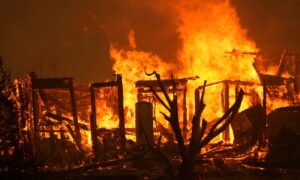 Wildfires, Coronavirus, and an Earthquake Collided for California's Terrible Week
0 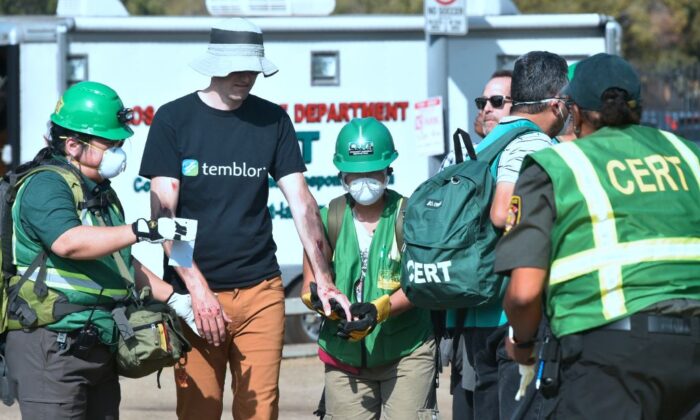 First responders tend to an exercise victim, playing the role of an earthquake casualty, during the 2017 Great California ShakeOut earthquake drill at the Natural History Museum in Los Angeles, Calif., on Oct. 19, 2017. (Frederic J. Brown/AFP via Getty Images)
Southern California

The city of Buena Park joined other regions throughout Orange County and the state of California by participating in the annual Great ShakeOut earthquake preparedness drill on Oct. 15.

The drill, in which participants react to a pretend earthquake as if it were really happening, began simultaneously across the state at 10:15 a.m. and lasted for about a minute. The goal of the drill is to make sure people are prepared when a significant temblor actually occurs.

Due to the COVID-19 pandemic, most of this year’s drills were held virtually, with organizers broadcasting the drill on Facebook Live.

Orange County had 636,209 participants who registered for this year’s event, according to the Great California ShakeOut’s website, with the majority coming from K-12 schools, colleges, and universities. The state of California as a whole had 6.6 million participants.

The drills in Buena Park were conducted at City Hall, the Public Works city yard, and the Buena Park Police Department.

Gina Van Stratten, a marketing specialist for the city of Buena Park, told The Epoch Times that “each year that staff participates in this important drill we learn that earthquake preparedness is vital to safety at work.”

“The more we practice, the more we become comfortable with the appropriate response. We are better prepared for when a big earthquake does strike,” Van Stratten said.

She said the drill teaches people how to react to a potential emergency situation by using a “mock earthquake” for training.

“Each staff member is made aware of the mock earthquake and then promptly stops, drops, and takes cover under their desk,” she said.

“Staff is then told when the mock earthquake has ended, and then each staff member evacuates the building and gathers in their assigned areas in the front and back parking lots. Some staff members have preassigned duties to take a count of the staff in their department to be sure everyone is present and made it out of the building safely.”

“At 10:15 a.m. we did an announcement on our PA [public address] system that an earthquake is occurring and for everyone in the building to please take cover,” Brodowski said in an email.

“We teach them to ‘drop, cover, and hold onto something’ in their present location. After 15 seconds we announced that the drill is completed.

“Then we sound the fire alarms and all persons in the building then exited to the predetermined evacuation location outside the buildings where we take role and ensure that everyone safely exited the buildings.”

The team then reports to its incident commander at City Hall, Brodowski said.

“We then reported … via our emergency radio system that all persons are present and accounted for and that is the end of the drill. We do this periodically to remind our employees of earthquake safety and how to properly exit the building and then account for everyone.

“It is a refresher on operating our radio system and reminds everyone of their designated role in these types of emergencies. For example, various employees are assigned and trained for search and rescue, first aid, etc.”

The group behind the Great ShakeOut, the Southern California Earthquake Center, held a live-streamed video showcasing the online drill, which was held virtually this year due to the COVID-19 pandemic.

Prior to the drill, the center exhibited presentations from earthquake and emergency management experts who discussed how to be safe during an earthquake, then allowed users to ask questions.

Ilyssa Plumer, the community preparedness officer for the Federal Emergency Management Agency (FEMA) Region 10, explained to the audience that a little bit of preparation before an earthquake strikes can have a big impact on how safe someone can be.

“Walk into each room and think: If an earthquake were to happen right now, what might fall over? What might cause harm or injury? And make changes,” Plumer suggested.

“It could be simple changes, like moving that tall bookshelf somewhere else that’s not near the couch where you sit and spend a lot of time, or actually reinforcing that top bookshelf into the wall so that if the ground starts shaking, it won’t fall over. You want to make sure you’re sitting and sleeping areas are clear from anything that could fall and injure you.”

Brian Terbush, the earthquake/volcano program coordinator from the state of Washington’s Emergency Management Department, also discussed tips on how to stay safe.

“In bed is actually statistically one of the safest places to be during an earthquake,” Terbush told viewers. “You just flip over and put your head over your [pillow] or put your pillow over your head, so you have a little bit of extra protection.”

Althea Rizzo, the Geologic Hazards Program coordinator for Oregon Emergency Management, gave suggestions about what to do if a person is outside.

“If you’re outdoors, you want to move to an open area and away from buildings, especially if you’re in a downtown area,” she said.

“A lot of times, the facings of those buildings can fall away and cause injuries to people who are passing by. So you want to get down low and move as quickly as possible to an open area away from buildings.”

The event also introduced a new smartphone app to viewers called “My Shake.”

The app—which alerts each user when an earthquake occurs, depending on location—was implemented for this year’s drill so that participants would know that it was set up correctly and that they would be warned in the future.

Officials recommended that Californians be prepared to be self-sufficient for 72 hours following an earthquake by having certain items handy, including a first-aid kit, food, and enough water for each member of a household to be able to drink a gallon a day for three days.

The Great ShakeOut started in 2008 and had nearly 29 million registered participants worldwide this year, including over 12 million people in the United States.