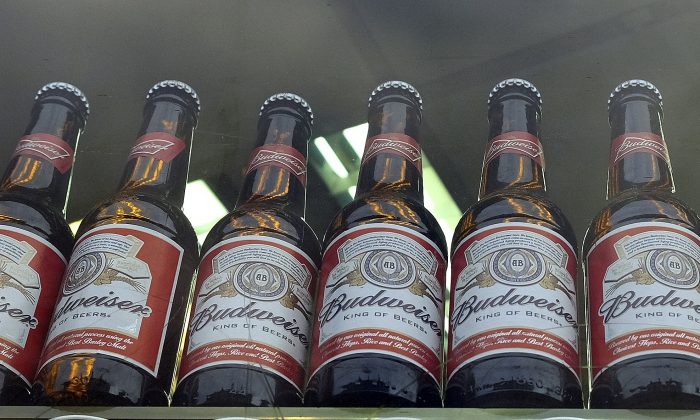 Bottles of Budweiser beer in a shop window in London on Oct. 13, 2015. Budweiser maker Anheuser-Busch InBev on Wednesday Nov. 11, 2015 announced a final agreement to buy SABMiller for 71 billion pounds ($107 billion), in a deal that will combine the world's two biggest brewers and create a company that makes almost a third of the beer consumed worldwide. (AP Photo/Kirsty Wigglesworth)
Business & Economy

LONDON—Budweiser maker Anheuser-Busch InBev announced Wednesday a final agreement to buy SABMiller for $107 billion (71 billion pounds), in a deal that will combine the world’s two biggest brewers and create a company that makes almost a third of the world’s beer.

In an effort to assure regulatory approval in the U.S., SABMiller agreed to sell its 58 percent stake in a venture with fellow brewer Molson Coors for $12 billion. The deal, which also includes rights to the Miller brand name worldwide, should ease concerns that AB InBev would have a stranglehold on the U.S. market after the merger.

The combined company—which as yet does not have a name—will also need to address regulatory issues in China, where SABMiller had a leading position with a 49 percent stake in the Chinese beer Snow. China is the focus of intense interest, as it already drinks a quarter of the world’s beer.

“This combination would create the first truly global brewer,” AB InBev Ceo Carlos Brito told reporters in a conference call after the deal, which is set to be completed next year.

AB InBev is seeking to bolster growth by acquiring SABMiller’s businesses in Africa and Asia as changing tastes and the growth of craft beers cut sales in developed markets. The two companies own hundreds of brands, including Budweiser, Corona, Grolsch and Stella Artois, and AB InBev expects to cut costs by $1.4 billion after the takeover.

“The transaction would strengthen AB InBev’s position in key emerging regions with strong growth prospects such as Asia, Central and South America, and Africa,” AB InBev said in a statement. “These regions have hugely attractive markets and will be critically important to the future success of the Combined Group.”

The company will be listed in Belgium, with secondary listings in Johannesburg, Mexico and New York.

AB InBev and SABMiller had twice extended the deadline for a formal offer after reaching an agreement in principle on Oct. 13. Shares in SABMiller rose 2.8 percent on Wednesday on relief that the deal was eventually formalized.

One of AB InBev’s prizes in creating a global beer company will be to gobble up SABMiller’s footprint in Africa. In a conference call with reporters, Brito made note of the potential for growth on the continent, where the middle class is growing.

SABMiller is the descendant of South African Breweries and has stretched its reach across the continent, betting that Africans will shift to higher quality beers as economic development increases disposable income. It had operations in 17 countries on the continent, with another 21 covered by Castel Group, in which it has a stake.

That foresight made SABMiller an attractive takeover target.

“This is all about growth,” Brito said, “And we’re very excited about prospects.”