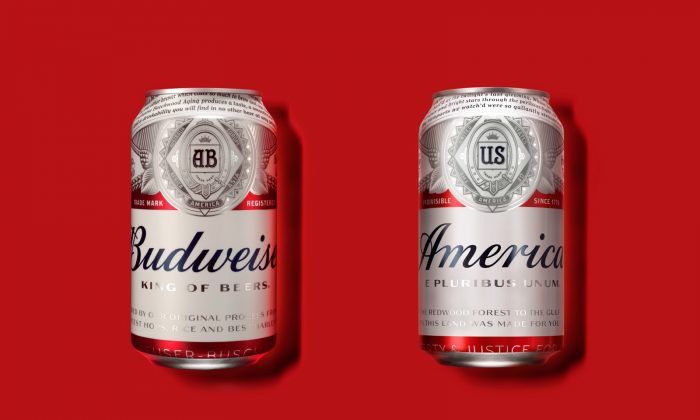 You will now be able to drink a can of red, white, and blue on a hot summer day as Budweiser changes its name to “America,” the company announced on May 10.

Anheuser-Busch InBev said in a press release the front of “Budweiser” 12-oz. cans and bottles will be changed to “America,” for its summer-long campaign– “America is in Your Hands.”

The limited-edition label change will go into effect from May 23 through the election in November.

But the patriotism doesn’t end with the name change. The beer labels will also include phrases from the Pledge of Allegiance and lyrics from “The Star Spangled Banner” and “America the Beautiful,” announced the company.

Here’s to America the beautiful. Hold her high this summer. #ThisBudsForYou pic.twitter.com/6uUd92MTJB

The changes were designed in partnership with Jones Knowles Ritchie New York. The company said the “America” cans will be featured in the beer’s new national TV commercial starting June 1.

“We are embarking on what should be the most patriotic summer that this generation has ever seen, with Copa America Centenario being held on U.S. soil for the first time, Team USA competing at the Rio 2016 Olympic and Paralympic Games,” said Budweiser Vice President Ricardo Marques.

“Budweiser has always strived to embody America in a bottle, and we’re honored to salute this great nation where our beer has been passionately brewed for the past 140 years,” he added.

The beer company is also launching new cans and bottles featuring a magnified view of the Statue of Liberty’s torch. The company said that move was inspired by Team Budweiser, the brand’s six athletes competing in the Olympics and Paralympics.

Budweiser began trending on Twitter after the announcement as people mocked the name change:

Wake me up when they change the name of America to Budweiser.

…so does this mean Captain America is changing his name to Captain Budweiser?