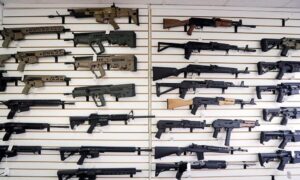 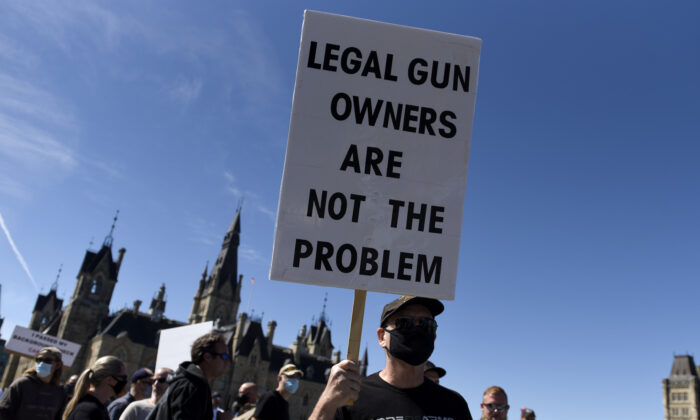 A gun owner holds a sign as they participate in a rally organized by the Canadian Coalition for Firearm Rights against the government's new gun regulations, on Parliament Hill in Ottawa, on Sept. 12, 2020. (The Canadian Press/Justin Tang)
Canada

OTTAWA—The parliamentary budget officer says it could cost the government $756 million to buy back guns now prohibited in the country, depending on how many there are in Canada and how the Liberals structure the program.

The high-end buyback figure is the budget officer’s estimate for how much it would cost for the government to buy back every gun that the industry estimates is owned across Canada.

Industry officials estimate there are 518,000 guns in the country, which would cost $756 million to purchase.

The government estimates a far lower figure, roughly 150,000 affected firearms, that the budget office estimates could cost up to $225 million to purchase.

The difference has to do with how many unregistered firearms are in Canada, which the budget officer notes is a challenge not unique to this country.

That unknown number, coupled with the unknowns of how the Liberals plan to build the program, leads budget officer Yves Giroux to say he can’t give a detailed cost estimate for the program.

Among the details that the government needs to sort out include what pricing plan the Liberals want to use, whether the federal treasury would cover transportation costs for gun owners, and administration costs.

“There remain too many outstanding questions on how this program will be implemented to currently develop a complete picture of the true potential cost of the program,” a report from the office of the parliamentary budget officer reads.

“Many of these details, such as the compensation structure and program administration costs, will have a significant impact on the overall cost of the program.”

The Liberals’ legislation, known as C-21, proposed a buyback of many recently banned firearms the government considers assault-style weapons. It was introduced in February, but never made it past second reading before the House of Commons took its summer recess.

The legislation followed a cabinet order in May 2020 prohibiting the firearms.