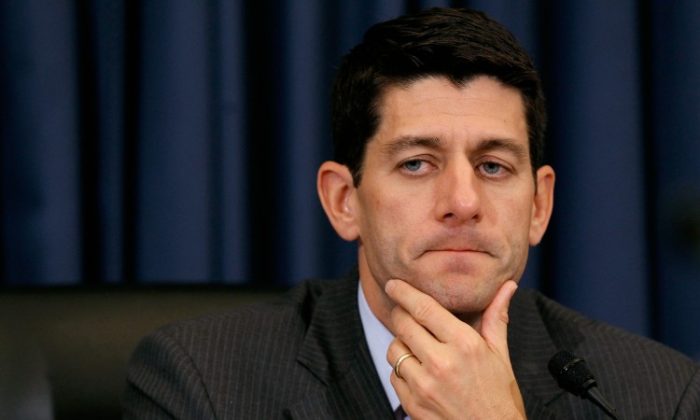 House Budget Committee Chairman Paul Ryan during a hearing on Capitol Hill on June 6 in Washington, D.C. According to the Congressional Budget Office, the U.S. budget deficit is likely to hit $1.1 trillion in 2012. (Chip Somodevilla/Getty Images)
US

WASHINGTON—The U.S. budget deficit is likely to hit $1.1 trillion in 2012, the Congressional Budget Office (CBO) said in a report, which warned that the fallout from the “fiscal cliff” could be greater than thought.

CBO Director Douglas Elmendorf described the ‘fiscal cliff’, which involves mandatory spending cuts of $1 trillion dollars, as “the biggest one-year reduction of the deficit as a share of the GPD in 40 years.”

“That is a sufficiently large negative shock to demand of goods and services next year, to push the economy into a significant recession in our assessment,” he told reporters at a press conference broadcast on C-Span.

The $1.1 trillion 2012 budget deficit projection, which covers up to Sept. 30, will mark the fourth year in a row that the U.S. deficit has exceeded $1 trillion, according to the CBO report released Aug. 22.

The report said the 2012 budget deficit was lower than predicted for 2012, and noted that the economy was continuing to recover, albeit at a “modest rate.” The unemployment rate was expected to stay above 8 percent, and the rate of inflation in consumer prices would remain low.

Elmendorf described the present economic path as “ultimately unsustainable,” however.

“At some point we will need to adopt policies that require people to pay significantly more in taxes and accept substantially less in government services—or both,” he said.

The ratio of debt to GDP in the United States is estimated to reach 90 percent of GDP by 2022, according to the CBO report. The report noted that by the end of this year, federal debt held by the public would reach 73 percent of GDP, the highest level of debt since 1950.

Elmendorf said that for policymakers, it is not a matter of whether to reduce budget deficits, “The question is when; the question is how,” he said.

The fiscal cliff will occur if Congress allows specific debt reduction policies to go ahead, as they are scheduled to do, in January 2013. These policies would see the end of Bush-era tax cuts, the end of extensions to emergency unemployment benefits, and the end of a 2 percentage point reduction in payroll tax.

When these policies are combined with sequestration—the ‘across the board’ spending cuts in defense and entitlements enacted under the Budget Control Act of 2011—the deficit would be reduced by $500 billion less than the shortfall in 2012, the CBO estimates. Under these policies, the budget deficit would shrink to an estimated $641 billion in fiscal year 2013, reducing the debt ratio to 4 percent of GDP.

Uncertainty in the marketplace generally, but particularly surrounding the looming fiscal cliff, has impacted investor confidence in the United States, a factor Elmendorf believes could hurt the economy going forward.

Businesses are sitting on a lot of cash, and if they could be encouraged to invest, it would spur the economy on in a type of “feedback loop,” he said.

“Additional investment and hiring would lead to more income and thus more spending by households, and this in turn [would] further business investments and hiring,” Elmendorf explained.

Construction levels have also been low and with low rates for mortgages, housing could also be an area of growth he suggested.

But neither of these positives will work unless some hard decisions are made.

“We have very serious budget challenges and very serious economic challenges in this country,” he told reporters. “The stakes are very high in the fiscal policy decisions that we are going to have to make very shortly.”